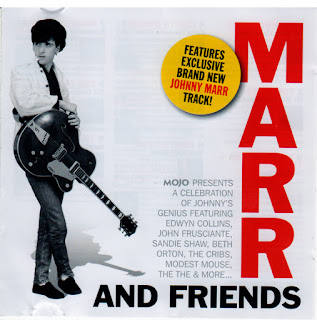 When The Smiths called it quits in 1987, it was no surprise when the band'’s charismatic lead singer Morrissey went on to a successful solo career. (By the way, his current US tour brings him to the Chicago Theatre on January 25th.) Morrissey’s writing partner, Johhny Marr, the guitarist who created classic riffs for songs like “How Soon Is Now?” has also been busy since the breakup. That's abundantly clear on Marr And Friends, the complimentary CD that comes with the January issue of MOJO magazine.

The 15 tracks showcase Marr’s guitar playing, as well as his songwriting, on collaborations with artists like Modest Mouse, The The, Kirsty MaColl, Beth Orton, and Robyn Hitchcock. There aren't any actual recordings of The Smiths, but there is a cover of their song, “Hand In Glove,” by 1960s singer Sandi Shaw. Rather than going back to her original British Invasion days, she uses a classic and fun new wave arrangement.

The best thing about Marr & Friends is the opening track, “The Right Thing Right.” It’s an energetic gem with a dash of The Who that bodes well for The Messenger, the solo effort Marr has coming out in February. The first five tracks on this compilation are the strongest. Marr works magic with his own band, The Healers on “The Last Ride,” The Cribs on “We Share The Same Skies,” Edwyn Collins on “Come Tomorrow Come Today,”and the previously mentioned Sandi Shaw on “Hand In Glove.”

Elsewhere, Billy Bragg sets a funny spoken word tale to Marr's acoustic strumming on a version of The Left Banke’s “Walk Away Renee,” and Transit Kings turn in an intriguing techno effort with “America Is Unavailable.” Some of the other tracks run a little slow, but overall, Marr & Friends is worth getting acquainted with. And it comes with a pretty cool magazine.
Posted by Terry Flamm at 10:44 PM