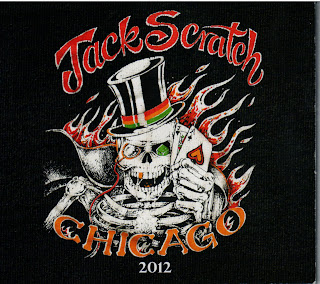 Earlier on Broken Hearted Toy, I reviewed a new CD by Norwood Park All Stars, a collection of musicians from bands that had been part of Chicago’s vital punk scene in the 1990s. Vocalist Dave Bergeron was a driving force in putting that project together, and he’s also at the helm of Jack Scratch’s recently released reunion effort, 2012. Back after a 20-year absence, Jack Scratch fills the 13 tracks with authentic energy and attitude.

It’s tempting to describe the CD in terms like “a high-speed drive back to punk’s heyday,” but it feels more like the work of musicians who never abandoned punk, for people who’ve always loved it. High-speed guitars and call-and-response vocals propel the melodic “Hold On Me,” and Jack Scratch brings funky grooves to the social satire of “Passion Fashion.” “Indeed” lets bassist Bob Byrnes cut loose, while drummer Keith Robbins kicks off “When Worlds Collide” and “See Saw.” Guitarists Earl Letiecq and Fran Kondorf never seem to take a break, and Bergeron consistently delivers the intense vocals you expect from a punk frontman.