I’m Happy (But So Is Brenda Lee) 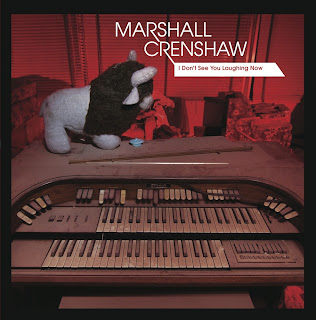 The Second Disc online newsletter regularly casts a spotlight on upcoming vinyl and CD releases that are likely to delight power pop fans. The latest example came today as The Second Disc broke the news about a series of 45 RPM EPs on 10"vinyl from Marshall Crenshaw. Each platter will follow the format of one new song, one cover, and one revised gem from the Crenshaw catalog.

The first release, I Don't See You Laughing Now, includes the title track, which reportedly features Graham Maby from Joe Jackson’s band on bass; a cover of The Move's "No Time,"recorded with Glen Burtnik from the Beatles cover band Liverpool, on guitar and vocals; and a live recording with The Bottle Rockets of "There She Goes Again." The EPs can be purchased separately or in a batch of three on Crenshaw's website. Better hurry. The limited edition red vinyl version has already sold out.

I know this post’s title is an inside joke that only Marshall Crenshaw fans will get, but hopefully someone besides me will think it’s clever.