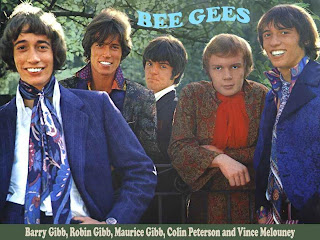 This will be second time I’ve posted this review on BHT, and it originally appeared in the Illinois Entertainer. But this seemed an appropriate way to bid farewell to Robin Gibb from those of us who remember The Bee Gees primarily as masters of baroque pop music. The influence of their early days can be found in 1980s Paisley Underground bands like The Three O’Clock, and currently in the work of Chicago’s The Luck Of Eden Hall.

The Odessa deluxe edition offers an additional CD of demos that give a behind the scenes look at the songwriting process. “Edison,” for example, started out as “Barbara Came To Stay,” and there are alternate takes for just about every song from the original release. The different arrangements of “Melody Fair” and “Black Diamond” in particular, stand on their own as great pop songs. This enhanced version may come with boatload of goodies, but the music itself proves this was a master work from the Bee Gees.
Posted by Terry Flamm at 11:27 PM