We’d Be Having Fun All Summer Long 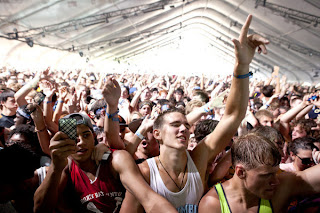 A wild time in Palatine. Actually, this is a Chicago Tribune photo of Lollapalooza, taken by Mike Rich/Redeye.

In terms of eagerly-awaited outdoor festivals here in the Midwest, there’s Lollapalooza, Pitchfork, and the Palatine Park District’s Sounds Of Summer. On any given Wednesday or Friday night from June 13th through August 3rd, you’re likely to find a horde of young fans thrashing in the mosh pit at the Fred P. Hall Amphitheater in the otherwise sedate northwest Illinois village.

Okay, you’ll really see suburbanites sitting around in lawn chairs. But it’s still one of summer’s essential pleasures to watch a live band performing on a breezy evening. The schedule for this year’s Sounds Of Summer series was recently released, and the three names that standout are the Beatles tribute band, American English (June 15th); rock music history buffs, The Neverly Brothers (June 22nd) and popular club band, 7th Heaven (June 20th). Each has built a justifiably loyal following and can be counted on to deliver an entertaining show.

Still, the 2012 lineup is pretty much the same as in previous years, and about the same as what’s being  offered at outdoor concerts being sponsored by the neighboring suburbs. 7th Heaven plays original music, but most of the other acts are cover bands, and a lot of them cater to baby boomers. It wouldn’t be fair to replace the bands who have earned those coveted slots, so how about expanding the season of suburban-sponsored summer concerts beyond the much-too-early final date of August 3rd, or have an additional night each week that would tap into the Chicago area’s vibrant club scene? There probably wouldn’t be any mosh pits but it could be refreshing for people to spend a summer evening discovering new music.
Posted by Terry Flamm at 11:44 PM