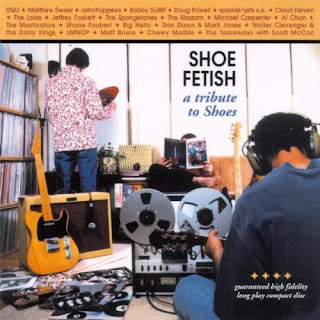 Author Mary E. Donnelly talked about her book, Boys Don’t Lie: A History Of Shoes with journalist Chris Kocher on WHRW Radio earlier today, and previewed a song from the band's upcoming CD, Ignition. Judging from the overwhelmingly positive comments on Facebook, the show went really well. I’ll definitely be picking up Boys Don’t Lie and Ignition once they’re available.

Here’s a 2001 review I did for the Illinois Entertainer of a various artists tribute to Shoes,  called Shoe Fetish.

Shoes have long been acknowledged as masters of power pop although commercial success lagged behind their critical acclaim. Shoe Fetish: A Tribute To Shoes honors the Zion, Illinois band with 22 mostly faithful versions performed by a variety of artists. Almost half the songs covered are from Present Tense and Tongue Twister, with only a handful a piece coming from Shoes’ other five releases.

Don Dixon and Marti Jones take the biggest risk by slowing the tempo on their rendition of “Only In My Sleep,” but their gamble pays off. Astropuppies give “The Tube” a vintage New Wave feel, The Masticators rough up “Your Imagination,” and Matt Bruno’s “When Push Comes To Shove” recalls Elvis Presley from his “Suspicious Minds” era.

Pretty much all the acts on Shoe Fetish hit the mark, but the best track comes from The Tearaways with Scott McCarl. Their version of “Never Had It Better” taps into the early Beatles and includes the coda from “Eight Days A Week.” It’s a fun, effective finale for tribute album to a band that has always drawn on 1960s pop for its inspiration.