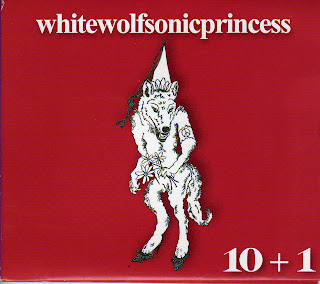 It’s easy to tell from the songs on 10 + 1 that whitewolfsonicprincess founding members vocalist Carla Hayden and vocalist-guitarist James Moeller come from an avant garde theater background. Their stream-of-consciousness lyrics conjure striking images that resist interpretation, while Hayden, who does most of the singing, employs a sultry, almost spoken word delivery. Still, Hayden and Moeller, backed by bassist Tim O’Brien and drummer Rich Meher, seem more at home as recording artists on this second effort. Their engaging music taps into Bob Dylan and Neil Young, as well as English folk revivalists like Steeleye Span and Fairport Convention.

While much of 10 + 1 is cryptic, there is a mystical theme that runs through it, particularly on “Sad-Eyed Prophet” and “Lady In The Sand.” The former features guest musician Steve Gibons on violin, while the latter benefits from some searing guitar playing from guest musician Victor Sanders. Moeller sings lead on the sparse, Young-like “Inner Light,” which deals with spiritual confusion, while “Radio Man,” thanks to Hayden’s vocals and guest musician Nick Anaya’s saxophone playing, exudes a nocturnal jazz ambience. The + 1 refers to bonus track, “Sad-Eyed Prophet Reprise,” on which guest musician Bob Long evokes Argent’s “Hold Your Head Up” with some powerful organ playing.
Posted by Terry Flamm at 11:26 PM