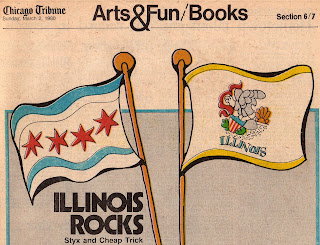 Steve Forstneger, the editor of the Illinois Entertainer recently forwarded a press release to me concerning a new power pop series called Buttons that’s being created by the Numero record label. The first installment, titled From Champaign To Chicago, will feature songs recorded between 1973 and 1987 by locals artists like Kevin Lee & Heartbeat, Loose Lips, The Kind, The Names, and Shoes. Mr. Forstneger correctly assumed that my reaction to this compilation would be, well, Total Insanity. I can’t wait to see it. I’m hoping to provide more information here about From Champaign To Chicago, as well as Buttons: Starter Kit, which will offer 20 songs from the much earlier and beloved Yellow Pills: Refill compilation, plus a pair of bonus cuts, in the near future.

In the meantime, here’s a look back at the Arts & Fun/Books section from the Chicago Tribune, on March 2nd, 1980. Rock critic Lynn Van Matre’s cover story, “Illinois Rocks,” is an extensive look at the area’s latest crop of rock and roll acts, with an eye toward which one might become the next Cheap Trick or Styx. The Cliff Johnson-led Off Broadway was profiled along with its manager (as well as Cheap Trick’s) Ken Adamany. There were shorter pieces on Shoes, Trillion, Pezband, Bill Quateman, Hounds, Survivor, Tantrum, The Boyzz, Wazmo Nariz, and Skafish. The choice of bands, the numerous photos and Van Matre’s insightful writing made this edition a keeper.

Other highlights in the March 2nd, 1980 Arts & Fun/Books section include film critic Gene Siskel’s criticism of that year’s Oscar nominees (“a couple of mediocre performances were wrongly honored; the best song category continues to be the laughingstock of the entire competition”) and theater critic Richard Christiansen’s piece on the “spirited troupe,” Steppenwolf. Some of the ads included Park West, which had Madness, The Jam, 999, and The Pretenders on its schedule; Johnny Cash at Holiday Star Theatre; the grand opening celebration of the Xanadu bar on north Broadway; and the Anne Rice novel, The Feast Of All Saints. Bob Seger fans could pick up an LP or tape of Against The Wind at Montgomery Ward for $6.49; and American Gigolo, All That Jazz, and Being There ware playing in the movie theatres.
Posted by Terry Flamm at 10:47 PM