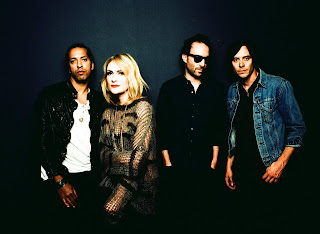 Metric has posted a new single called “Youth Without Youth” to sites like MySpace and SoundCloud. It’s from the band’s new Synthentica CD, which is scheduled for release on June 12th. Lead vocalist Emily Haines and guitarist James Shaw recently recorded an acoustic version for Rolling Stone online.  Metric’s upcoming world tour includes a stop in Chicago for Lollapalooza on August 12th

People who missed Magatha Trysty, The Right Tidys, and The Viaducts  at International Pop Overthrow - Chicago last month can see all three bands in one night at The Abbey Pub on May 26th. Magatha Trysty has a full-length debut CD coming out soon, and promises to bring 3-D postcards, t-shirts, and other “pre-album surprises.” Show time is 8:00 PM, tickets are $6 in advance, $8 at the door.

Last Sunday, my wife Pam and I caught a matinee showing of the new Pirates! Band Of Misfits movie. The amazing animation, clever dialogue, and sight gags are worthy of the Aardman brand (the studio that created Wallace & Gromit) and the soundtrack includes songs by Supergrass, Flight Of The Conchords, and The English Beat. The theatre was completely empty, so it was hard to figure out why a newly arriving couple felt the need to sit directly behind us. Soon it became painfully obvious they craved an audience for their incessant commentary and quips throughout the coming attractions. Fortunately, they kept quiet during the actual flick, but still, how could they be so annoying and pretentious? Don’t they know that’s what blogs are for?
This Is This, a local trio that has recorded a few CDs of melodic mainstream rock, will be playing at the J. Flemings Restaurant in Westmont. on May 19th.

Hostage Song, Signal Ensemble Theatre’s new rock opera with political undertones, opened on May 5th, and will run through June 9th. The play features music and lyrics by Kyle Jarro, arrangements by Nathan Leigh, and book by Clay McLeod Chapman.

As I take on more volunteer work for the Jokes4Miles project, one of my main goals will be to persuade musicians, comics, and theatre people to record a joke, short anecdote, or song for 19-year old Miles Austrevich and upload it to the Jokes4Miles site. It’s easy to do, and Miles gets a kick out of watching the clips while he’s undergoing therapy for brain cancer. His father, stand-up comedian Len Austrevich, wants to collect 5,000 videotaped messages, and so far has successfully enlisted Bill Murray, Jay Leno, Amy Poehler, Will Arnett, Ernie Banks, and several other celebrities. Len and Miles are also currently working on a Jokes4Miles documentary.
Posted by Terry Flamm at 10:54 PM

Thanks for your expert tips. I think my boss must see this post…

Wow, Jokes4Miles sounds like an incredible project. Thanks for the update.

Also, I saw that Marian chose you for a RAOK blitz yesterday and I just wanted to stop and say hi!