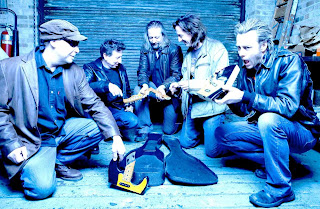 Palatine’s very own co-ed synth rock band Dot Dot Dot will be busy this weekend with a gig tonight at Rivers Casino in Des Plaines, and tomorrow night at the Bluebird in Bloomington.

The Mary-Arrchie Theatre Company, which is wrapping up its highly successful run of the Tracy Letts play, Superior Donuts, is already making plans for its annual Abbie Hoffman Died For Our Sins Festival. The freewheeling, three-day event is always held in August, on or around the anniversary of the original Woodstock peace and love event.

The first meeting for performers interested in taking part will be next Sunday, May 13th. There’s also an Abbie Fest t-shirt design contest this year, with a tickets/shirt prize package worth $300 for the winner. Designs can be emailed to info@maryarrchie.com. On a more somber note, Mary-Arrchie is dedicating this weekend’s performances of Superior Donuts to former group member Turk Muller, who recently passed away.

Ellis Clark & His Band will be at the CAU (Chicago Acoustic Underground) Singer Songwriter Night at the Viaduct Theater tomorrow night. In addition to Clark, who has played in and founded his share of groups over the years, musicians Phil Angotti, Jeff Brown, Joe Taylor, Dustin Walker, and Brad Elvis will be on hand. Showtime is at 9:00 PM, the Viaduct Theater is located at 3111 N. Western Avenue.

Singer-guitarist Jon Auer, a member of The Posies, whose reunion CD Blood/Candy was one of 2010’s best  releases, has been keeping busy with other projects lately. He produced about half of the new Mania! CD by The Melismatics, and sings on it as well (my review is in the May issue of the Illinois Entertainer). He’s also got a project going with UK performer Tiz Aramini called Dynamo Royale and is seeking funds on Kickstarter. So far, Dynamo Royale has reached $6,829 of its $8,000 goal, with 19 days left, so it’s looking good.

The Montrose Room at the InterContinental O’Hare in Rosemont, has some interesting shows coming up. The Neverly Brothers will be performing their rock history show there tonight; power pop masters The Bad Examples play next Saturday, May 12th, and Mike Flynn’s Crash Landing, along with Mimi Betinis of Pezband will be rocking on May 18th.

The Second Disc online newsletter recently reported that Heart has a box set coming out on June 5th. Titled Strange Euphoria, it will features three CDs covering the Wilson sisters from their pioneering days with the 1960s band, The Daybreaks, on through to their most current work on Red Velvet Car. The package will also include a DVD of a 1976 live performance by the band.

The Beat Kitchen will be presenting four bands as part of its Mayfest next Thursday. Frosting, led by veteran Chicago musician Marl “Spiv” Grzelak; Tomorrow The Moon, which features Bad Examples guitarist Steve Gerlach; Kevin Tihista’s Red Terror; and The Welcome comprise the lineup. The show starts at 7:30.

Goodbye, Norma Jean. Artist J. Seward Johnson’s controversial Marilyn Monroe sculpture, which has been attracting tourists and photographers to Pioneer Court in downtown Chicago over the last year, will soon be on its way to Palm Springs, California. That is unless a certain comedic writer/ performer and noted Marilyn fanatic from the Famous In The Future comedy group doesn’t find a way to steal it. Just be careful, Dez.

They’ve previously honored John Lennon and Bob Dylan, and now Black Forest has a Paul McCartney tribute lined up for next Saturday at Cafe Mozart in Evanston. As with past Black Forest tribute events, the Sir Paul celebration will feature a number of performers, including Black Forest’s musical offshoot, whitewolfsonicprincess, Pat McDonald from The Telepaths, Mr. Mo, and Hannah Frank. The free event starts at 7:00 PM, Cafe Mozart is located at 600 Davis Street, FL 1, in Evanston.

Expo 76, a copy band comprised of music scene veterans, will return to its regular haunt, Simon’s Tavern, next Wednesday, May 9th at 8:00 PM. Singer-guitarist Dag Juhlin must have been in an alliterative mood when he composed the Facebook post, since he described the gig as May’s Blossoming Bounty of Beautifulness, and his band as yammering yaybobs of ya-mo-be-there. There’s no cover charge, and The Total Pro Horns will be on hand to augment Expo 76’s eclectic cover versions.

International Pop Overthrow  has now moved on to Milwaukee for a three-day run at Linnemans this weekend, but I still have fond memories of its recent Chicago showcases at Red Line Tap.

I caught three bands of the six bands scheduled for the Monday, April 23rd. The Redfords offered shimmering shoegazer music as well as harder edged rock; both driven by inventive guitar work. Their impressive set included faithful covers of The Cure’s “Love Song” and Material Issue’s “Valerie Loves Me.” Red Giant, a trio visiting from Milwaukee, was definitely more hard rock than the usual IPO fare, but their music also had elements of funk, soul, and spoken word. It was great to see Trolley, also from Milwaukee, perform live, since I had picked their Things That Shine And Glow as one of the Top 10 2011 releases. Classic power pop tunes “The Calico Cat” and “In The End” were even more impressive performed live. I also enjoyed meeting singer-guitarist Paul J. Wall, who serves as one of the band’s three lead vocalists.

The Saturday afternoon showcase on April 28th, featured one of the festival’s most varied lineups. The power pop trio 92 Degrees kicked things off with a selection of timeless classics from their self-titled debut on Black Vinyl Records, as well as from an even earlier vinyl EP called Money Makes The World Go ‘Round. The Unswept, a duo of transplanted Brits now living in the Lincoln Park area, sported matching sweater vests and geek glasses as they mixed catchy 1960s flavored material with funny chatting between songs. Singer-songwriter Jess Godwin worked in a more urban contemporary mode, backed by a six-piece band. She has an engaging stage presence, and is capable of belting out a lyric when the song calls for it.

Canadian singer-songwriter Andy Griffiths strummed an acoustic guitar and delivered thought-provoking lyrics in a rough hewn voice. It was an impressive solo performance. Your Gracious Host, AKA indie rock singer-guitarist Tom Curless, was joined by special guest, and former Autoliner band mate, singer-guitarist Brian Leach. The duo strummed guitars and created some amazing harmony vocals. Longtime IPO performer Jeremy closed out the afternoon showcase with some guitar-driven power pop. It would have been interesting to hear the story behind why he was performing with teenage musicians, but the songs were still impressive.