Why Can’t We Go On As Three? 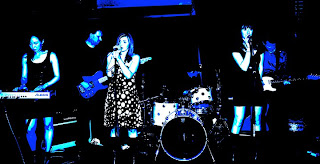 The triple bill at the Abbey Pub a few days ago brought back fond memories of International Pop Overthrow - Chicago. All three acts, The Right Tidys, Magatha Trysty, and The Viaducts were part of this year’s IPO festival in April, and it was fun seeing them join forces again this past Saturday. The good vibes flowing throughout the night weren’t only due to a Right Tidys fan sharing a huge birthday cake with everyone in the bar.

I talked to all four members of Magatha Trysty outside The Abbey shortly before the club opened, and it was obvious how excited they are about their full-length debut coming out in just a few weeks. A short time later, as the second act on the bill, Magatha Trysty blasted through a mix of power pop songs, ranging from the older “Printer’s Row”  to newer tunes like “Clairvoyant” and “Want To Stay.” Keyboards player Catherine Louise and guitarist Chris Bevard are both accomplished singers, and much of the band’s distinctive sound comes from their harmonies. At times, the male/female vocal dynamic recalls Exene Cervenka and John Doe of X, or the lesser known, Boston band, Trona, but Magatha Trysty can also pack a more basic rock punch similar to Neil Young.

The night's opening act, The Right Tidys, are also known for vocal interplay - - between singers Erica Loftus and Michelle Tormey -  -  but Tormey wasn’t able to make this gig. That left Loftus alone in the spotlight, but she had no problem belting out lyrics above her four band mates’ hard-hitting but melodic playing. In addition to catchy originals like “Set The Hook” and “Rippin’ Me Off,” the band also offered a revved up take on Berlin’s  “The Metro.” Dhyana Brummel’s keyboards playing enables The Right Tidys to tap into new wave, power pop, or garage rock. After the set, Loftus and bass player Lou Galassini (also a member of IPO- Chicago veterans, Van Go) told me that The Right Tidys will be releasing their debut CD later this year.

The Viaducts tapped into their full-length CD, Mission To Destroy, with singer-guitarist Jimmy Rane leading the way. His original songs, like “Tell Me Sister” and “Suffering” explore troubling subjects, and Rane brings them to life via powerful vocals and blistering guitar playing. At one point, someone in the audience called out, “Are you all right?” to which Rane responded, “I’m never all right. Have you been listening to these songs?” An impressive power trio, The Viaducts occasionally veer into hard rock, but also play more Ramones style material like the high-speed and fun “Drive-Thru Girl.”