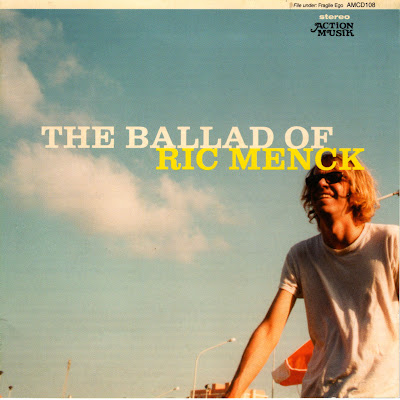 Velvet Crush member Ric Menck’s newly remastered version of his 1996 solo effort The Ballad Of Ric Menck includes five bonus tracks and documents his progression from an avid fan of power pop to one of the genre’s better performers. Designed to resemble a vinyl album from the mid-60s, it also includes extensive liner notes by the artist.

The bonus track “Wishing On A Star” was co-written with the late Jim Ellison of Material Issue and recalls the Los Angeles 1980s Paisley Underground scene. Menck notes that “Delaware Rain,” which makes its CD debut here, was directly influenced by R.E.M.’s “Don’t Go Back To Rockville.” The guitar-driven love song “Big Blue Buzz” is another one of the successful bonus tracks.

Menck’s cover of the Graham Nash era Hollies song “Clown” adds a more modern guitar sound, and he also connects with Matthew Sweet’s pop gem, “Are We Gonna Be Alright?” The Hollies and Sweet songs were on the original Ballad Of Ric Menck, but his cover of Syd Barrett’s “Golden Hair” is a new addition. Menck’s own compositions on The Ballad Of Ric Menck, like the psychedelic “Perfect Day” and mid tempo “Sunflower” are consistently enjoyable.