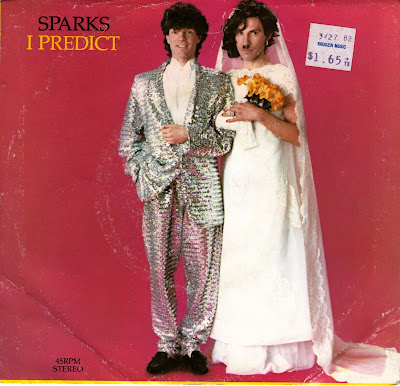 Note the record store tag on the sleeve. Kroozin Music had at least two locations in Chicago back in the 1980s. I was a regular customer at the one on 79th Street just east of Pulaski. It was a great place to find a variety of rock singles and albums, including punk, new wave, hard rock, and imports. It was also one of the few places on the southwest side where you could pick up a copy of Chicago's weekly alternative newspaper The Reader.

Sparks works that same ubernerd vs posterboy dynamic that has always worked so well for Cheap Trick. But most guys would feel safer letting Rick Nielsen or Bun E. Carlos give their girlfriend a ride home that Ron Mael. Maybe it was the Hitler moustache, or those robotic head movements he executed while playing keyboards. At any rate, he and his much more sane looking brother, vocalist Russell Mael, gave us lots of humorous, catchy songs.

“I Predict,” recorded in 1982, sets a series of circumstances and their results to a punchy arrangement featuring keyboards, guitar, and a pulsing bass. It kicks off with the sensible “You’re gonna take a walk in the rain and you’re gonna get wet” before moving on to more outlandish predictions. “They’re gonna find that the Queen is man, but that Phillip don’t care” is quickly followed by “Lassie will prove that Elvis and her had a fleeting affair.” Each line is punctuated with an emphatic “I predict!” The lyrics further proclaim that “cold beer and pretzels take care of cancer” (a nice thought) before repeating the line, “And this song will fade out” over and over while the “I Predict” does just that.

The B-Side, “Moustache,” which was also taken from Angst In My Pants (Sparks loved their punning album titles) moves to a faster arrangement as it explores various styles of facial hair.