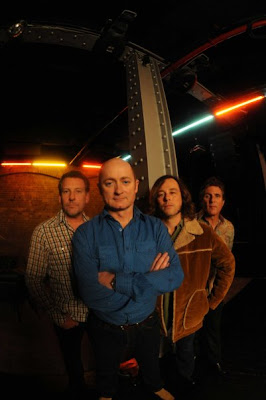 A number of female musicians will get their just due when Cyndi Lauper hosts Women Who Rock, which airs on Channel 11 in Chicago tonight. The PBS documentary was inspired by a Rock And Roll Hall Of Fame exhibition bearing the same title and offers interviews with Bonnie Raitt, Heart, and others; concert footage; and live performances. It’s an expansive look that covers early pioneers like Bessie Smith, Maybelle Carter, and Mahalia Jackson; and moves on through Janis Joplin, and up to current stars like Lady Gaga.

The Telepaths, a cutting edge band that includes musician/actor/political firebrand James Moeller and performer/critic Pat McDonald, will be part of Face Melting Friday tonight at The Mutiny. The bands Friend and The Mainliners are also on the bill. The show starts at 9:00 PM. Mutiny is located at 2428 N. Western Avenue in Chicago.

Brad Elvis and Graham Elvis will be playing drums and guitar respectively for a number of performers as part of the Karen For Kids concert at Beat Kitchen this Sunday afternoon. “Sorry, no Elvis Brothers songs or reunion,” Brad Elvis noted on his Facebook page. There will be kid songs, food, and as they say in ad lingo, fun for the whole family. The show starts at noon.

Chicago filmmaker Michael Glover Smith, who made quite a splash on the indie festival circuit with his folk music satire, At Last, Okemah!, will be on hand for the premiere of his latest effort, The Catastrophe at the Illinois International Film Festival at 3:00 PM tomorrow afternoon. My interview with Smith about this intriguing new work can be found on the online magazine Chicago DIY Film. The Illinois International Film Festival kicks off tonight and runs through Sunday at the Viaduct Theatre, located at 3111 N. Western Avenue in Chicago. A $10 ticket allows you to check out screenings throughout the weekend.

Chris Isaak is coming to the North Shore Center for the Performing Arts in Skokie on Saturday December 10th. Isaak’s latest CD, Beyond The Sun finds him covering tunes from the 1950s. Tickets are sale now.

Solo artist and former Pezband lead vocalist Mimi Betinis will be performing at the Penny Road Pub in the northwest suburb of Barrington next Friday, November 25th. His most recent CD, All That Glitters, is loaded with well-crafted melodic tunes.

Congratulations to The Hoodoo Gurus. The quirky and sometimes cranky power pop band will be inducted into a Hall Of Fame at the The Age’s E.G. Awards ceremony on November 22nd in Melbourne. Apparently the awards, which have been around since 2006, are related to a popular Australian publication. The Hoodoo Gurus will be performing at the event, which will help benefit Support Act Limited, a charity that aids members of the Australian music industry.

Herb Eimerman, the Chicago based power pop bassist-vocalist who’s been part of the international trio The Britannicas for the past few years, adds to his global resume with his latest project, Green Beetles. This time out, he’s joined by fellow Britannicas member, Australian vocalist-guitarist Joe Algeri; another Aussie, guitarist-vocalist Dom Mariani; and Swedish drummer Stefan Johansson. Their first song, “The Basement” is available for free download at Algeri’s bandcamp page. Algeri wrote this catchy, high energy tune about a romantic reunion that comes together over playing vinyl records in the title room. Hope to hear more from this band.

hi terry - thanks for the telepaths mention! now i'm a "political firebrand" too?!? awesome! revolution and rock!