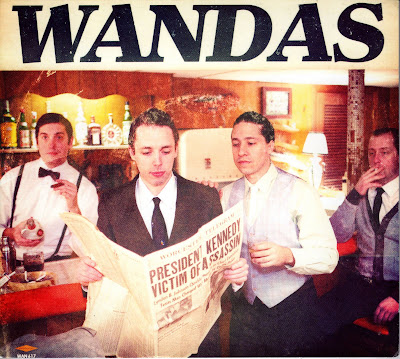 The Wandas recorded their latest release, a self-titled collection of 11 songs, pretty much live in the studio. That includes the highly impressive three part harmonies from lead vocalist-multi-instrumentalist Keith McEachern, guitarist-backup vocalist Brent Battey, and drummer-backup vocalist William Bierce. (Bassist Ross Lucivero is the fourth member.) While these Boston-based musicians fall in the indie rock genre, their well-crafted songs draw on a variety of influences.

“Longtime Running” has the immediate appeal of a C&W toe-tapper, but there’s a vintage Pink Floyd feel as well, as McEachern offers cutting lines like, “At least I know not to count on you.” The acoustic-based “Loaded” depicts a well-off guy who still gets drunk every night, while the somber waltz, “Shotguns And Booze” examines the lasting impact of a tragic incident. The Wandas continually match irresistible melodies to thought-provoking lyrics, whether it’s on the jangling pop satire of “Mr. Mister” or the acerbic “I Think It’s Time (You Got Over Yourself).”