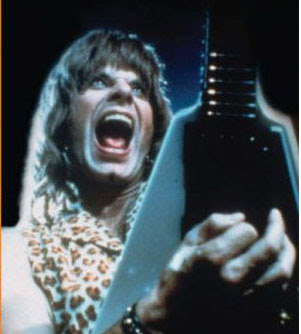 We’re Only Making Plans For Nigel. Happy Nigel Tufnel Day! In honor of 11-11-11, there are 11 items in this week’s edition of Slumgullion.

1. Uncommon Ground, the hipster restaurant that’s been around Chicago for 20 years, will be celebrating the opening of a new listening room at its Clark Street location tonight with performances from five local musicians. Ingrid Graudins, Phil Angotti, Liam Davis, Steve Dawson, and Rachelle Eve will be part of a showcase that kicks off at 10:00 PM.

2. Seven bands, along with MC Rattina, will take part in the Covers For Cover III benefit being held for the Primo Center for Women and Children next Thursday, November 17th at Schubas. Organizer Mia Park told me in an email a while back that participating bands will have “a strong female presence & have female front people or have at least 50% women.” The lineup features Heartache2Heartache as Pat Benatar; Madam Ant as Adam Ant; In The Flesh as Blondie; The Lady Sentinels as Britney Spears; Parkway as The Buzzcocks; Planet Claire as The B-52’s; and The Hey Hos as The Ramones. Tickets are $12 or $10 with a donation of new toiletries at the door. The show begins at 8:30 PM.

3. The Sun-Times ran a story by Dave Hoekstra this past Wednesday detailing Cheap Trick’s plan to open Cheap Trick Chicago, a combination museum/radio station/restaurant/rock club at 2245 S. Michigan Avenue in Chicago. The venue would be a nice fit for what’s now dubbed the Record Row-Motor Row district, which was once home to Chess, Vee-Jay, and Brunswick Records. A number of other organizations and entrepreneurs are said to be interested in developing projects in the area. This might be a good time to point out that I portrayed a curator of a pop culture museum on the comedy series Manchester Gallery that Pam and I created for the Sunday Morning Coffee With Jeff internet show. Just in case Cheap Trick is hiring.

4. Doctor Who fans with a couple hundred bucks to spend might want to pre-order a 1:6 Scale Limited Edition Eleventh Doctor Collector Figure from the English company Big Chief. The figure, which is officially licensed and authorized by BBC Worldwide, looks amazingly like actor Matt Smith, who currently plays The Doctor in the long-running sci-fi series. Judging from the Big Chief website, this is the company’s first crack at celebrity sculptures. It should be interesting to see who they honor next.

5. The new Shoes website reports the Zion, Illinois based power pop band had a busy October, working on the 15 new songs for an upcoming CD. The latest effort will mark the first time drummer John Richardson who has played live gigs with Shoes for several years, will be joining them in the recording studio.

6. Over 50 short films will be shown at the Illinois International Film Festival which is being held next weekend, November 18th through the 20th at the Viaduct Theatre. The lineup includes a Friday night screening of Garage Hoppers, a comedy I’ve mentioned before on Broken Hearted Toy, and covered for Chicago DIY Film. Bryn Packard, who was once a member of my former comedy group Famous In The Future is part of the cast. The Viaduct Theatre is located at 3111 N. Western Avenue in Chicago. 773-296-6024. Tickets are $10 at the door and are good for all screenings throughout the weekend.

7. Freda Got Funded. Looks like we’ll be seeing Good Ol’ Freda after all. The documentary about Freda Kelly, onetime secretary for the Official Beatles Fan Club, reached its goal of raising $50,000 on the Kickstarter funding site. Director Ryan White is now set to start putting the film together. No word yet on when it will be finished. Freda Kelly will be one of the guests at the Fest For Beatles Fans - Chicago in August 2012.

8. The people at Rock Art Show, an online shop for art and photos of and by famous musicians, want you to keep them in mind for holiday gift-giving this year. But you’ll have to be quick to keep up with a new promotion where a unique item will be introduced each Monday and only be available for that week. The treasure hunt starts this coming Monday, and Rock Art Show is promising something special for Pink Floyd fans. There’s no mention of this promotion on the actual site, so I guess you'll have to sign up to receive email updates. That’s how I found out about it.

9. The new website Knock Down Ninja describes itself as being “like Kickstarter.com for buzz” although I’m not really sure what that means. The general idea seems to be they'll convince celebrities to do something wacky if enough fans request it The current challenge involves all-woman band Antigone Rising playing an acoustic gig in a New York subway. Fans are being encouraged to spread the word via Twitter and Facebook. “We want to push bands to do extraordinary things and interact with fans,” Dan Voell from Knock Down Ninja explains. The site explains how the shares system works.

10. The Chicago Tribune recently carried an item from The Wrap stating that actor Bradley Cooper of The Hangover fame will not be portraying Napoleon Solo in Steven Soderbergh’s cinematic update of the ultra cool 1960s TV show, The Man From U.N.C.L.E. It’s reassuring to learn there'll be a Napoleon Solo in the film. Hopefully that means Soderbergh’s not going to pull a Mission Impossible type stunt where Solo, Illya Kurakin, Mr. Waverly, April Dancer, and Mark Slate get killed off in the first few minutes and are replaced by a new spy. By the way, Mr. Soderbergh, although my scenes as an extra were cut from your Contagion film, I'm available for The Man From U.N.C.L.E.

11. They’re not dead yet. The Bad Examples will celebrate the 20th Anniversary of their debut CD Bad Is Beautiful with a show on Saturday, November 26th at FitzGeralds in Berwyn. The band’s Facebook page promises special surprises, as well as a video and artifact display circa 1991. It’s worth pointing out that The Bad Examples’ latest effort, Smash Record, stands as one of 2011’s better releases.