CD Review: Various Artists - Gag Me With A Spoon 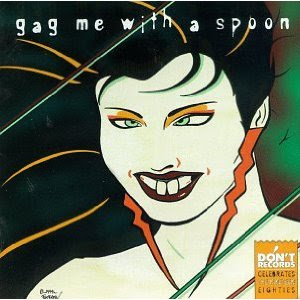 Before moving on to the CD review, here are a few suggestions for kicking off the long holiday weekend.

Alt rock/country & western band Dolly Varden and The Phil Angotti Band will be sharing a double bill tonight at SPACE in Evanston. The show is at 8:00 PM.

Quenchers Saloon is staging a Black Wednesday Rock n’ Roll Show tonight, featuring No Enemy!, The Safes, and The Sonnets. Quenchers is located at 2401 N. Western Avenue in Chicago. Show time is 8:30 PM

Note: The following review first appeared in the Illinois Entertainer.

Don’t Records isn’t the first independent label to showcase its roster of fledgling artists on a collection of cover versions, but the Milwaukee-based record company does the tradition proud with Gag Me With A Spoon. The CD lets a number of local acts sink their teeth into some of the bigger new wave and alternative hits of the 1980s, with varying degrees of respect or irrelevance.

The Blow Pops and Alex Ballard & Sugarfoot deliver faithful renditions of “The Ghost In You” and “Talk Of The Town” respectively, while The Falling Wallendas replace the energy of “Every Little Thing She Does Is Magic” with a slower, dreamier arrangement. Willy Porter serves up a bluesy take on “Whip It,” and Pet Engines give “How Soon Is Now?” a revved up cowpoke spin. Citizen King’s all male version of “I Know What Boys Like,” along with several other inventive interpretations, helps make Gag Me With A Spoon a fun party record.