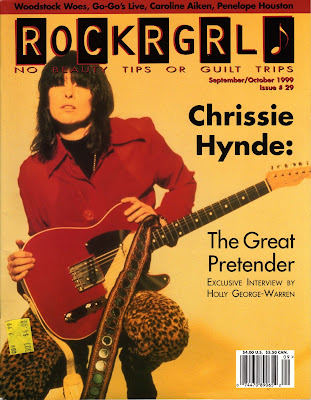 Note: I just updated a lot of info in the Elevated Observations portion of this blog.

There are a few issues of Rockrgrl in my archives, although not as many as at The Smithsonian in Washington, D.C., which has the entire 57-issue set. It’s interesting to compare the September/October 1999 issue with the one from January/February 2005. Sadly, the magazine would cease publication later that year.

Publisher/Editor Carla A. DeSantis tops the masthead for both issues; while Contributing Editors Gail Vogel and Kathleen Warnock, as well as writer Steven Thompson were also still around in 2005. Rockrgrl had more of a ‘zine feel on the earlier issue, with its sporadic ads being mostly for bands, and everything except the front and back cover being in black and white. The 2005 issue was glossy and colorful, with quite a few more ads, but obviously DeSantis had still held true to her mission of spotlighting women musicians.

Noted writer Holly George-Warren remarked in her 1999 cover story on Chrissie Hynde that the singer despised being called “a woman in rock” and didn’t consider herself a role model for young girls. The band had just released its first CD in five years, ¡Viva el Amor! at the time of the interview. Her advice to upcoming musicians of either gender was to not burn themselves out on drugs or alcohol. “And to me, though rock is all about breaking rules and you’re allowed to do whatever you want,” Hynde explained. “I have my own rules that I stick to.”

The 1999 issue also had features on Dianne Izzo, Penelope Houston, and L7. Steve Thompson covered a concert by The Go-Gos’s, who were on their 20th Anniversary Tour with Berlin and Lunachicks. He gave a thumbs up to all three acts, although he noted that the more confrontational (but funny) Lunachicks had trouble connecting with fans who had come to see The Go-Go’s. There were CD reviews of The Muffs’ Alert Today Alive Tomorrow, the Linda Ronstadt & Emmylou Harris collaboration Western Wall: The Tucson Sessions, and Fetish by Joan Jett & The Blackhearts. Gail Vogel’s Rock Gadgets column covered reasonably priced guitars and amps, and in her Editor’s Note, DeSantis reflected back on her earliest days of writing about women in rock, and the excitement of discovering that first Pretenders album.

Rockrgrl was is in its 10th year in 2005 (the March/April issue would officially mark the anniversary) and looked like it was doing well. There was a cover story on Rosanne Cash, and other featured artists included Angie Heaton, Melissa Etheridge, All Girl Summer Fun Band, Mindy Smith, Rachael Yamagata, Tegan and Sara, and Martha Davis of The Motels. There was a live review of PJ Harvey at the Knitting Factory in New York, and CD reviews of Alanis Morissette, Minnie Driver, Patti Griffin, and A Girl Called Eddy. The issue also announced the winning entries for The Rockrgrl Capture The Moment Photo Contest.

Although Rockrgrl is no longer in print, DeSantis has created a Facebook page for the magazine.

Thanks, Terry! If you want an update on what I'm up to my new site is www.carladesantisblack.com