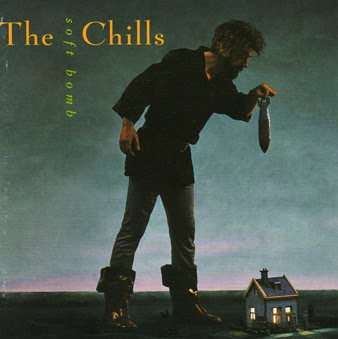 The Chills spin one interesting tale after another on Soft Bomb, the ambitious follow-up to the New Zealand’s band’s breakthrough release, Submarine Bells. Lead vocalist Martin Phillipps, who writes all the material, depicts a mercenary on “Strange Case,” and gives us a trapped housewife with “Sanctuary.” An underlying theme of increasing frustration is particularly evident when the vaudeville influenced snippet, “There Is No Harm In Trying” is later revisited as “There Is No Point In Trying.”

The acerbic “The Male Monster From The Id” kicks Soft Bomb with off with the engaging pop The Chills have become so well known for, and is quickly followed by the punchier “Background Affair.” “Double Summer”is a slice of dreamy romantic pop and on “Ocean, Ocean” The Chills try a more energetic approach. The atmospheric ballad “The Entertainer” evokes Jim Morrison at his most haunting, while the theatrical finale, “Water Wolves” makes use of a full orchestra.