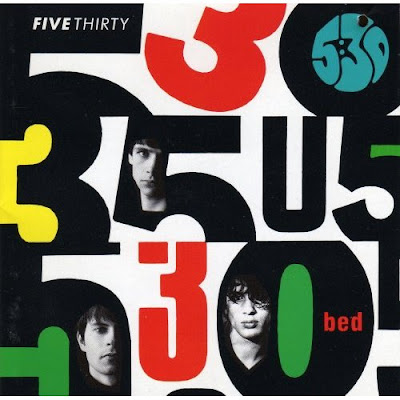 In the rush to get last Friday’s Slumgullion column out during the holiday weekend, I forgot to thank Carla DeSantis Black for commenting on last Tuesday’s Rockrgrl Vintage Publication Spotlight. DeSantis Black was the publisher/editor of the magazine during its 10-year run. Rockrgirl has been widely recognized for its role in promoting women musicians, and DeSantis Black still actively pursues that mission on her current website. I’m honored that she enjoyed my tribute.

Now on to today’s CD review, which originally appeared in the Illinois Entertainer in 1991.

The English trio Five Thirty takes on the world with high energy pop songs on its debut release, Bed. Beginning with “Supernova,” a blast at self-indulgent rock stars, the band goes on to snipe at Margaret Thatcher and organized religion. The songs, penned by vocalist-guitarist Tara Milton and guitarist-vocalist Paul Bassett, tend toward clever wordplay, as evidenced by titles like “Junk Male” and “Womb With A View.”

Produced by the band members themselves, along with Marc Waterman, Bed is impressive for its well-crafted arrangements as well. “Songs And Paintings,” with its echo-laden chorus, is an XTC influenced jab at censorship, and the metallic voices of “Automatons” paint an eerie portrait of a modern, faceless society. Five Thirty also impresses with its straight ahead love songs; “You” is a catchy slice of heartbreak pop, while “Psycho Cupid” is a melodic lament for thwarted romantic dreams.