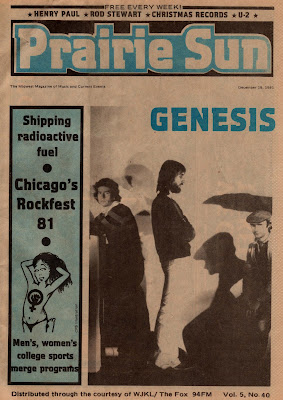 My latest entry in an ongoing series devoted to ‘zines of the past.

It was a definite step up from MEC, not only in quality, but also in terms of circulation. Prairie Sun was distributed in several states, and it was my understanding that it was especially popular on college campuses. Several of the people involved with this publication are still active in the entertainment business, including Matlow, Cary Baker, Bill Paige, Linda Cain, and Kevin Toelle.

This particular issue came out on December 19, 1981, and featured a cover story on Genesis. I contributed a lengthy piece on the WLS sponsored Rockfest ‘81, lamenting that it failed to draw as big of a crowd as a similar event sponsored by WLUP a year earlier, despite the presence of solid national acts like The Go-Go’s, Red Ryder, The Kings, The Knack, and Loverboy. I also had high praise for local performers Shoes, The Kind, and Off Broadway.

In the Reviews section, Kevin Morrissey wrote about the now legendary U2 performance at Chicago’s Park West club; Steve Rager heralded Rod Stewart’s Tonight’s The Night as “his most potent album in six years;” and Bill Huyten covered the Muddy Waters concert in the Quad Cities. The Weekly Record column wondered if Steve Martin’s Twilight Theatre would replace Saturday Night Live; noted that ABC TV’s 20/20 was doing a segment on bands like The Kinks and Jefferson Starship who had been around 15 years; and complained that, “One of rock ‘n’ roll’s true slimes, Ozzy Osbourne is touring again.” Of course that was before Oz became a family man.

Like Chicago’s Reader, Prairie Sun covered political topics as well. Ron Wolf did a piece on transporting plutonium; and there was also an item titled Congress Targets Federal Election Commission. This issue also contained the ballot for The 1981-82 Prairie Sun Readers’ Poll, with categories such as Best Live Performer; Best Midwest Album; and Best Midwest Single. Unfortunately, we eventually lost this entertaining and eclectic publication, I believe somewhere in the mid-1980s.