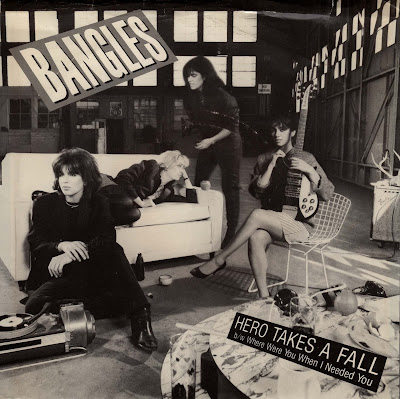 The Bangles official website sponsored a live online chat room with vocalist-guitarist Vicki Peterson last night. She spent a few hours answering questions, and her most interesting responses had to do with the new CD The Bangles are currently recording. It’s due to be released later this year.

Asked by a fan to compare the new CD to the band’s solid but underrated 2003 release, Doll Revolution, Peterson reckoned it would be looser and more eclectic. More like The Bangles’ 1984 full length debut, All Over The Place. She added that she couldn’t say for sure, because it’s not finished yet.

All Over The Place featured the modest hit single, “Hero Takes A Fall,” an edgy guitar-driven gem that even critics who later soured on the band still admit is a good song. The video helped break the band on MTV. The song was written by singer-guitarist Susanna Hoffs and Peterson; one of the nine originals on All Over The Place. In later years, under pressure to continue their string of hits, The Bangles brought in hired guns to help write some songs. Unfortunately, this created the popular and lingering misconception that the band was unable to write its own material.

The Bangles do have a history of interpreting other artists, like the late Alex Chilton, Kimberly Rew, Jules Shear, and Elvis Costello, but that’s probably because they’re so good at it. Take for example, “Where Were You When I Needed You,” the B-Side of “Hero Takes A Fall.” Written by the 1960s songwriting duo P. F Sloan and Steve Barri, it’s a melodic lament about being betrayed by a lover, with an intricate vocal arrangement that calls to mind The Mamas & The Papas.

So if The Bangles’ next effort does take them back to the more carefree, power pop and garage rock days of All Over The Place, that would certainly be a good thing. Can't wait to find out.