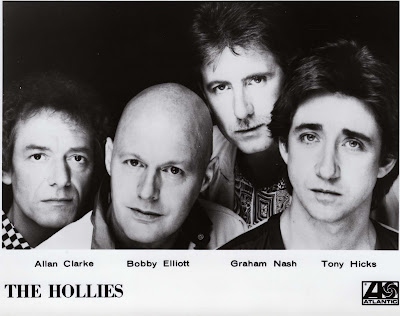 Just a reminder that The Hollies will be inducted into The Rock And Roll Hall Of Fame tonight. The ceremony will be broadcast on the Fuse Channel at 7:30 PM Central Standard Time. Break out the champagne and celebrate.

It's also a good time to pay tribute to the late Carl Wayne, who served as The Hollies’ lead vocalist from 2000 to 2004. Already famous for his work with The Move as well as in theatre productions, Carl sought to bring Hollies fans closer to their favorite group. I had the honor of meeting him in 2002. As I wrote in a piece for Amplifier Magazine, he was the people's Hollie.

I met Wayne while The Hollies were doing a soundcheck hours before an outdoor concert in Stillwater, Minnesota. The band ran through a few songs at the soundcheck; seeming to take longer because there were a number of fans watching them. Unfortunately, the actual concert was rained out, and I’ve never had a chance to see The Hollies since. Hopefully, the Rock And Roll Hall Of Fame honor will spark some sort of tour in the United States. Maybe even one that brings the current and former members together.