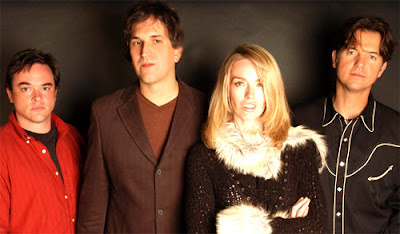 Another free, all-you-can-read buffet of entertainment items for a Friday.

International Pop Overthrow, the traveling showcase of power pop music, returns to Chicago on April 22nd with a seven band line-up at The Abbey Pub. It continues through May 1st with more showcases at The Abbey, as well as The Spot, Bird’s Nest, and Red Line Tap. I won’t go into too much detail here, but I’ll be doing reviews of various performances at the time of fest. The entire schedule can be seen on the International Pop Overthrow - Chicago page on Facebook, and hopefully soon at the official IPO website. There are still some TBA slots, but so far, a few of my favorites, like The Lackloves, The Goldstars, and The Handcuffs are MIA. Just a few quick recommendations: Ellis Clark & Epicycle at The Abbey on April 23rd; a 92 Degrees daytime gig at The Abbey on April 24th; an afternoon show by Hollus at The Abbey on April 25th; back-to-back sets by The Valley Downs and The Webstirs at Bird’s Nest on April 30th; and The Cliff Johnson Band at The Abbey on May 1st.

This should come as no surprise to listeners of Underground Garage, but the syndicated radio show’s wicked cool host Little Steven Van Zandt will be the person who inducts The Hollies at The Rock And Roll Hall Of Fame ceremony on March 15th. Van Zandt has been a champion of the band for some time, and I can’t wait to hear his introduction. The Rock And Roll Hall Of Fame website also lists the presenters for the other inductees, including Barry and Robin Gibb for ABBA; Trey Anastasio for Genesis; Wyclef Jean for Jimmy Cliff; and Billie Joe Armstrong for The Stooges. The ceremony can be seen live online at http://www.fuse.tv on March 15th at 8:30 EST.

Moving on to a different Hall Of Fame, The Buckinghams, one of Chicago’s most successful bands of the 1960s, were among the 64 inductees for the 2009 Hit Parade Hall Of Fame. (Inductees from the past year are announced in January.) Formed in 2006, the Hit Parade Hall Of Fame honors recording artists who had two or more hit singles in the 1950s, 1960s, and 1970s. The nominating committee is comprised of several veteran radio personalities, including Larry Lujack and Wink Martindale. This news comes courtesy of former Buckinghams lead vocalist Dennis Tufano’s blog, which also notes that he will be performing a 4th of July concert in Arlington Heights, along with The Cryan Shames and former Shadows Of Knight lead singer Jimmy Sohns.

Vocalist-guitarist Jimmy Herter of the 1960s tribute band The New Invaders is going the solo route for a show on March 13th at the Prime Time Restaurant in Hickory Hills, Illinois. Herter is one of the six talented singers and musicians who enable The New Invaders to cover a wide selection of material, including pop, garage rock, and soul. It should be interesting to see what he comes up with for his own gig. He’ll be back with The New Invaders for a show on March 27th at the new Ballydoyle’s at the Stratford Square Mall in Bloomington.

I’ve been following Todd Wright’s quest to raise funds to fight Juvenile Diabetes through his 40x40 project in the Elevated Observations column of this blog, but the singer-songwriter has other things going on as well. He’ll be performing with a full band at Jammin’ Java in Vienna, Virginia on March 10th, and will be at The Belmont in Texas on March 17th as part of the Manic Fest Destiny. Meanwhile, Wright has reached week 23 of 40x40 by making the song “Anything At All” available to download for free at www.orangepopsongs.com That’s also the site where you can get details on how to help find a cure to Juvenile Diabetes.