Return Of The Two Teens 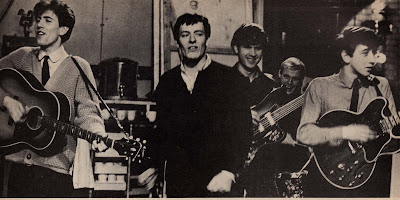 From left to right: Nash, Clarke, Haydock, Elliott, and Hicks.

The Hollies were inducted into the Rock And Roll Hall of Fame at an official ceremony held in New York on March 15th. The show was broadcast on the Fuse cable channel. Prior to Little Steven Van Zandt’s introduction, there was a video montage of the band performing its hits on various TV shows and at concerts, plus snippets of interviews from over the years.

Van Zandt opened with a shout out to Iggy Pop, who had rocked the house with a live performance following his induction. Van Zandt went on to take a few swipes at the current state of the recording industry and The Grammy Awards in particular, before he got around to talking about The Hollies. But his genuine passion for rock and roll added weight to his endorsement of the band, as he described Tony Hicks as an underrated guitarist, lauded Bobby Elliott’s inventive drumming style, and praised the three part harmonies of Allan Clarke, Graham Nash, and Hicks.

As expected, Nash, Clarke, and Terry Sylvester were on hand to accept the awards, and it was a pleasant surprise to see original bass player Eric Haydock and the man who replaced him, Bernie Calvert, also on hand. Fuse got the bassists mixed up; showing Calvert’s name on the screen while Haydock was speaking. Hicks and Elliott were not able to attend because they were performing with the current version of The Hollies at The London Palladium.

Clarke reminisced about how he and Nash met as kids in school, and grew up sharing a love for rock music. Nash was particularly pleased to see his lifelong friend receive the Hall Of Fame Honor. Sylvester cracked a few jokes, and then paid tribute to the band’s first manager.

As for the performance, Clarke and an acoustic guitar strumming Nash sang “Bus Stop” and “Carrie Anne,” backed by The Paul Schaffer Band (from The Late Show with David Letterman) and with some vocal assistance from Adam Levine and Jesse Carmichael of Maroon 5. Van Zandt kicked off “Long Cool Woman In Black Dress” by playing its famous guitar intro, and Patrick Monahan from Train came on stage to handle the lead singing. Clarke, who sang lead on the original, strapped on an electric guitar for this number, and joined Nash on back-up vocals. Sylvester joined the rousing rendition, singing a few lines on a mic he borrowed from Monahan.

It was great that The Hollies finally received this long overdue honor. And even more touching to see Graham Nash and Allan Clarke, laughing and having a blast together, decades removed from their first performances together as The Two Teens in the clubs of Manchester, England.