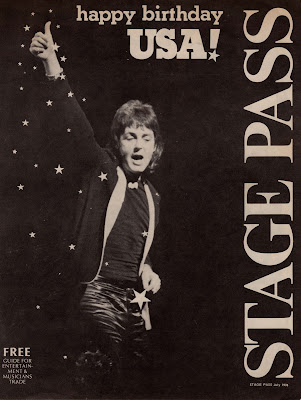 Another entry in an ongoing series devoted to ‘zines of the past.

This might be the earliest publication in my collection that I came by naturally. Meaning that I didn’t buy it off eBay several years later. Of course, I picked up lots of magazines, newspapers, and comic books before 1976, when this issue of Stage Pass came out, but somehow they didn’t survive the passage of time.

This July issue celebrated America’s bicentennial with a photo of non-Yank Paul McCartney, taken by Bill Sosin, on the front cover. The publication’s address was a P.O Box in Hoffman Estates, Illinois, and the Managing Editor was Mike Freeman. Contributors included Trudi Garber, Paul Natkin, Steve Ekblad, Marianne Lah, and V. Palmisano. In addition to taking the cover shot, Sosin was in charge of graphic arts and photography, and Stage Pass even had a man in London by the name of John Smith. Anita Simeoli was listed as Representative.

A calendar on the inside cover listed upcoming concerts including The Miracles and War at Milwaukee Summerfest; Jefferson Starship and Heart at the Milwaukee Arena; Kiss, Uriah Heep, Ted Nugent, and Bob Seger at Comiskey Park; The Band and Emmmylou Harris at Washington Park; and Crosby & Nash at the Auditorium Theatre. You could also spend An Evening With Rod Stewart at the Uptown Theatre, and catch Elton John at the Chicago Stadium. The News section reported that Cliff Johnson’s new group had changed its name from American Flyer to The Thumbs (later to be d’thumbs).

This issue had feature stories on The Hounds, The Boyzz, Steve Miller, Nazareth, Jefferson Starship, and Eric Andersen. Most of the ads were for local rock clubs. Harlow’s - East India, my favorite hangout when I was a beer-swigging sout’ sider, had a good month lined up with gigs by The Hounds, Pezband, and The Thumbs. Night Gallery in Waukegan had Cheap Trick; BGinnings in Schaumburg had The Association and Shadows Of Knight; Rush West in Glen Ellyn had shows by Mad Fox and Skylady; and Camel’s Hump in Hannover Park had a double bill of Jim Peterik and the Pink Floyd tribute band Rhinestone.

The back cover of the July 1976 Stage Pass was a full page ad for The Fox Stereo 94 WJKL-Elgin, where “progressive music keeps rollin.’”

I miss the days of Zines. I attempted to start my own a few times. Today, anyone with 15 minutes to spare can start their own blog, but back in the day, to start a zines, you have to really be dedicated to the subject.