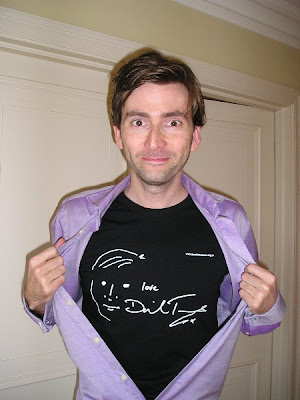 Another Friday collection of various items from the world of entertainment.

He took you to every corner of the universe, and now he wants to sell you a t shirt. Actor David Tennant, who just wrapped up his tenure on Doctor Who, has designed a t-shirt to be sold exclusively through Headway Essex, an English charity that helps people with brain injuries. Tennant’s design, a sort of scribbled self-portrait, looks like he might have seen a few of John Lennon’s doodles. The shirt is available in black or white, comes in either a male or female fit, and sells for £22. The bad news: so far it looks like only people in the U.K. can order them. By the way, the next season of Doctor Who, with Matt Smith now in the lead role, kicks off on BBC America on Saturday, April 17th.

I’m sure I was just one of the many people who learned about Alex Chilton’s death by reading about it on Facebook and Twitter. There were dozens of posts, as musicians like Jon Auer and Ken Stringfellow of The Posies, Matthew Sweet, and Vicki Peterson of The Bangles mingled with fans in expressing their surprise and sorrow. It was a touching tribute to Chilton, who started out as a teenager with The Box Tops, and went on to inspire the birth of power pop through his work with Big Star.

Chicago is delivering a well-deserved honor to home town hero Steve Goodman by naming a post office after him. Goodman, who died of leukemia in 1984, penned “City Of New Orleans,” which was a hit for Arlo Guthrie, and also recorded classic satirical songs like “A Dying Cub Fan’s Last Request” and “Lincoln Park Pirates.”

Singer-guitarist Kevin Lee’s new EP, Dusk Till Dawn is the follow-up to his impressive 2006 full length collection of catchy power pop tunes, Flip The Switch. He and his back-up band, The Kings will be celebrating its release with a performance tonight at The Elbo Room, located at 2871 N. Lincoln Avenue in Chicago. The Kings include bassist Dann Morr, drummer Erik Strommer, and guitarist Johnny Million, formerly of Big Hello.

Midas Touch - The Very Best Of The Hollies was released in England in late February, where it immediately nabbed the #23 slot on the official BBC Albums Chart. The two-disc set has 48 tracks, including live recordings of “The Baby” and “I Would Fly.” Cool looking CD cover, but those of us who already own about 50 Hollies compilations might hold off.