They Did The Monster (Power Pop) Mash 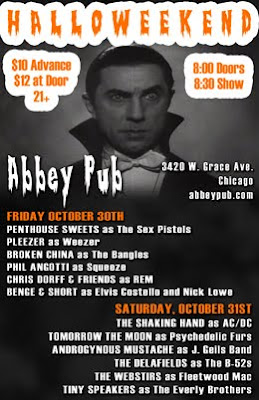 The Abbey Pub on Chicago’s northwest side kicked off its tribute band weekend last night in fine style with six local acts performing in the guise of famous rock bands.

Openers Benge & Short offered a mostly acoustic performance of Elvis Costello and Nick Lowe songs, and their harmonies were perfect. “Cruel To Be Kind” and “(What’s So Funny ‘bout) Peace, Love, and Understanding” were particularly memorable. Next up was Chris Dorf and Friends, whose high-energy set of R.E.M. covers like “Radio Free Europe” and “South Central Rain” electrified the audience. The band was basically Skapone with a guest singer who portrayed Michael Stipe with a wig for the older songs and with a shaved head for the newer stuff; and Dorf’s brother, who played guitar and added mandolin to “Losing My Religion.”

Phil Angotti, along with a band that included Ellis Clark on keyboards, offered stellar renditions of vintage Squeeze material like “Black Coffee In Bed,” Tempted,” and “Is That Love?” In addition to Angotti’s strong vocals, there were plenty of strong harmonies. Broken China covered most of The Bangles’ big hits, but it would have been interesting to see them take on Hoffs and company’s less commercial fare like “Hero Takes A Fall” or “Some Dreams Come True.” Still, the audience loved Broken China, holding up lighters during “Eternal Flame” and waving their arms to “Walk Like An Egyptian.”

M. Marlow offered a highly entertaining take on Weezer, from the early “Buddy Holly” to the current “Troublemaker.” Penthouse Sweets captured the belligerent attitude of The Sex Pistols by flashing middle fingers and spraying the audience with beer, while roaring through covers of “Pretty Vacant” and “Anarchy In The U.K.”

All the bands offered great music, and the enthusiastic audience members, many of whom came in costumes, made the evening more fun. The Abbey Pub will be at it again tonight, with an impressive line-up that includes Tomorrow The Moon as The Psychedelic Furs; Androgynous Mustache as The J. Geils Band; The Delafields as The B-52’s; The Webstirs as Fleetwood Mac; and Tiny Speakers as The Everly Brothers. Unfortunately, I can’t make tonight’s show, but I highly recommend it. Hey Abbey Pub, how about making this an annual monster mash?