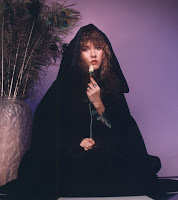 Back in 1975, no one could have predicted that the arrival of Stevie Nicks and Lindsey Buckingham would transform Fleetwood Mac into the world’s hottest rock band. Perhaps some of that success came from divine intervention. Nicks explained that her melodic composition “Rhiannon,” which became one of the Top 40 hits from the LP, Fleetwood Mac, was about a Welsh witch, but Rhiannon was also a goddess in Welsh mythology who wore a gold dress and rode a white horse. Wikipedia states that Nicks based her “Rhiannon” on a much more recent work, Triad, a supernatural novel penned by Mary Leader, and discovered the mythological connection later. Actually, the song’s mysterious lyrics like, “Would you stay if she promised you heaven” and “She is like a cat in the dark/And then she is the darkness,” could refer to either the deity or the sorceress. Fleetwood Mac, having already recorded scary songs like “Hypnotized” and “Black Magic Woman,” knew how to bring “Rhiannon” to life with a classic rock arrangement. Incidentally, www.goddess.com states that in some medieval tales, Rhiannon became Vivienne, the Lady of the Lake. Or in Monty Python’s words, the watery tart who lobbed a scimitar at King Arthur.