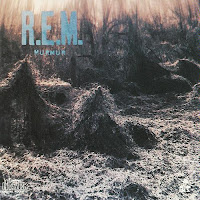 The lyrics for R.E.M.’s “Wolves, Lower” won’t send chills down your spine or put you in a festive, Halloween party mood. Kicking off with the odd command, “Suspicion yourself, suspicion yourself, don’t get caught,” these lyrics don’t do much of anything. There’s some talk of a corner garden, a house in order, and wilder lower wolves, but what it all means is anyone’s guess. It’s the way vocalist Michael Stipe invokes these cryptic images, and the jangling guitar-driven arrangement that make “Wolves, Lower,” from the 1982 Chronic Town EP, such a haunting experience. I still remember how the song grabbed my attention the first time I heard it on WXRT. Back then, everything R.E.M. did seemed shrouded in mystery, including their dimly lit live performances that evoked a campfire ambience. That elusive spirit carried over to the next release, Murmur, particularly on murky songs like “Pilgrimage” and “Perfect Circle.” It was like The Byrds had formed a cult and were conjuring music out in the kudzu-infested fields of Athens, Georgia. R.E.M. quickly became a college radio sensation by reinventing 1960s folk rock, and they would move on to world-wide acclaim and greatly influence countless new bands. So as we celebrate Halloween, here’s a tip of the witch hat to R.E.M. for all the years they’ve kept us in the dark.