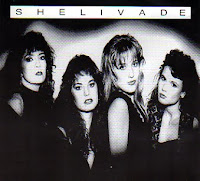 Attractive young vampires are the hottest thing in popular cultures these days, but the seductive power of these creatures has been celebrated for years. Back in 1994, the Chicago-based four woman band Shelivade served up the captivating “Into The Night” on its debut CD, One More Than Ten. It’s an emotionally-charged hard rock duet between lead vocalist Jean Iversen and guest singer Jon Dobbs that simmers with sexual tension on lines like, “Darkness wakes my love/Lures me into the night/Haunts me with desire/My fate is your fire.” Iversen, who like myself, has written for the Illinois Entertainer, does a great job of belting out these lyrics ala Ann Wilson from Heart, and the way Dobbs weaves his vocals around hers is reminiscent of an opera. Vanessa Eichelberger’s guitar playing provides an energetic backdrop while the vampire’s modus operandi is rendered in short, poetic bursts. “Rapid pulse, empty veins/Feel my throat, blessed pain.” “Into The Night” ends with the line, “Vacant mirror, then I’m gone,” followed by one of the best evil laughs in rock since Vincent Price added his chuckle to Michael Jackson’s “Thriller.”