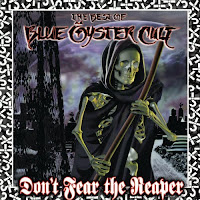 Hair-raising scenarios come naturally to hard rock and heavy metal bands, but Blue Oyster Cult’s variety of approaches is impressive. “Nosferatu” was a majestic and brooding meditation on the original vampire tale, while the lumbering “Godzilla,” with lines like, “Oh no, there goes Tokyo! Go, Go, Godzilla!” was unabashed fun. The band literally struck gold with “Don’t Fear The Reaper.” The opening guitar riff and progressive arrangement are pure classic rock, but the song spread across genres and became a huge hit. Which is strange, because the lyrics appear to advocate suicide as the ultimate expression of love. “Seasons don’t fear the reaper/Nor do the wind, the sun or the rain... we can be like they are.” They also promise “We’ll be able to fly” and point out, “Romeo and Juliet are together in eternity.” Blue Oyster Cult effectively sells these sentiments through a strong melody and intricate harmony vocals. There’s even a “La la la la la la” and “Come on, baby.” It’s almost like The Beach Boys inviting a girl to the sock hop. The last verse describes a despondent woman whose lover has already died. “And it was clear she couldn’t go on.” The final image is of the reunited couple looking back and saying goodbye to the living. Or is she checking out with the Reaper himself? Somehow, it doesn’t seem likely “Don’t Fear The Reaper” will be played at many wedding receptions.

No I guess we are stuck with CCR's "Proud Mary" when it comes to wedding tunes..."big wheel keep on turning..."