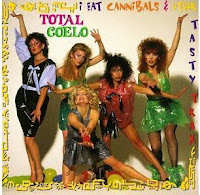 People, people who eat people, are the luckiest people - - - Back in 1983, the U.K. band Toto Coelo became a one-hit wonder with the guilty pleasure single, “I Eat Cannibals.” Using a playful vocal arrangement backed by a big, loud tribal beat and exotic sounding keyboards, the five-woman band served up provocative lines like, “All I wanna do is make is make a meal of you” and the sweeter “You’re the icing on the cake.” Part of the song’s success was no doubt due to its rock video, which showed the attractive band members wearing trash bags while cavorting around neon lit grass huts. Wax Trax still had a record store on Lincoln Avenue in Chicago at the time, and its staff often added comments to the plastic dividers used to identify 45 records. Under the title, “I Eat Cannibals,” someone had written, “Who doesn’t?” The band eventually changed its name to Total Coelo as an unnecessary precaution that these five gals would be confused with the American band, Toto.