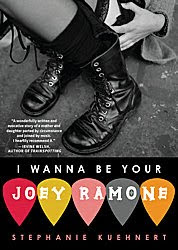 Author Stephanie Kuehnert will be reading from her latest Young Adult novel, Ballads of Suburbia, at 2:00PM this coming Saturday, October 17th at the Borders Bookstore on 1144 Lake Street in Oak Park, and at 7:30PM on October 20th at HopLeaf on 5148 North Clark in Chicago. Ballads Of Suburbia is the follow-up to Kuehnert’s critically acclaimed first novel, I Wanna Be Your Joey Ramone.

I just finished reading I Wanna Be Your Joey Ramone. It’s a gritty, well-written account of a young girl named Emily Black, who initially buys her father’s explanation that her mother abandoned them shortly after Emily’s birth to pursue her passion for rock and roll. It helps that Emily’s Dad is an understanding parent who passes his musical talent on to his daughter and nurtures her guitar playing ability. As Emily grows into her teens and finds success with She Laughs, the punk band she formed with her best friend Regan, she discovers some disturbing details about her mother and becomes obsessed with finding her. Emily also battles drug and alcohol abuse, and starts an ill-fated relationship with the aptly-named musician Johnny Threat.

When Emily moves from a rural town in Wisconsin to Chicago, Kuehnert captures the thriving big city music scene with references to record company reps, critics, the Metro, Fireside Bowl, the Logan Square neighborhood, and Q101’s Twisted Christmas concert. The descriptions of Emily’s love of rock music, as well as the emotionally charged scenes with her family, bandmates, and boyfriends all ring true. I Wanna Be Your Joey Ramone is a fascinating backstage look at a complex individual from her childhood to her emergence as world famous rock star. It’s a safe bet that Ballads Of Suburbia is another compelling work.