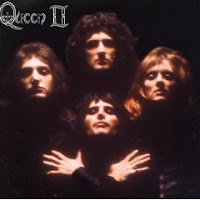 A thread of medieval sorcery runs through Queen’s second LP, released in 1974. Lead singer Freddie Mercury’s compositions, “Ogre Battle” and “The March Of The Black Queen” provide some of the scarier moments on Queen II, while guitarist Brian May’s atmospheric “White Queen” is more like a Shakespearean drama of unrequited love. Set to a gentle arrangement that gradually builds power, the poetic lyrics depict a man who maintains a nocturnal vigil for a beautiful yet sad-eyed maiden. “And ‘neath her window have I stayed/I loved the footsteps that she made/And when she came/White queen how my heart did ache.” Later, he declares, “The white queen walks and the night grows pale.” There’s a hint of something supernatural going on here, as though the troubled damsel needs this guy to save her. Or maybe he’s just a little full of himself. “So sad it ends,” the song concludes, “as it began.”