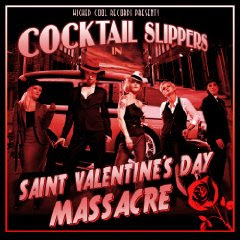 On their 2007 debut, Mastermind, the Cocktail Slippers sounded like they couldn’t decide whether to aim for a highly commercial sound or follow the less financially secure garage rock path recommended by their mentor, Little Steven Van Zandt. The result was an uneven and at times, timid effort from this promising five-woman band from Oslo, Norway.

This year’s Saint Valentine’s Day Massacre, once again on the Wicked Cool label, is much stronger. “Sentenced To Love,” a punchy, garage rock song filled with clever legal metaphors, kicks off the disc in an energetic fashion.

Van Zandt co-produced the CD with the band members, who sound more accomplished and confident. He also wrote the catchy title track, which uses gangster lingo to describe the perils of romantic entanglements. Like all of the songs on Massacre, it’s a winning blend of garage rock, power pop, and the early 1960s girl group sound. The Cocktail Slippers have also perfected their harmonies, frequently joining lead singer Modesty Blaze for some spirited vocal interplay on songs like “Gotta Crush” and “In The City.”

“Heard You Got A Thing For Me,” which sports a light and exotic arrangement, is another Van Zandt composition. “Don’t Ever Leave Me” is a successful update of the 1964 Connie Francis hit written by Ellie Greenwich and Jeff Barry. The Cocktail Slippers allude to Greenwich’s “Da Doo Ron Ron” on their own hard-edged song, “You Do Run.” “She’s A Fool,” originally recorded by Leslie Gore, is another golden oldie that Cocktail Slippers make their own. Saint Valentine’s Day Massacre hasn’t earned the Cocktail Slippers megastar status, but it’s a definitely a well-crafted effort.