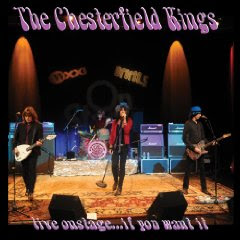 A special Happy Thanksgiving wish to all who visit this site.

The Chesterfield Kings are often credited with igniting the return of garage rock. There’s a definite early Rolling Stones feel to the band’s guitar-driven music, particularly on Psychedelic Sunrise and The Mindbending Sounds Of The Chesterfield Kings, the two CDs that came out on the Wicked Cool label during the past few years.

The newly released Live Onstage ...If You Want It, produced by Ed Stasium, who has worked with The Smithereens and The Ramones, presents acoustic and electric versions of songs from those two albums. It’s available in two versions; a CD/DVD set, and a deluxe LP/CD/DVD. I haven’t had a chance to hear Live Onstage ...If You Want It yet, but here’s a reprint of a review I did of their last album, Psychedelic Sunrise, that originally appeared in the Illinois Entertainer.

The Chesterfield Kings have always dug hanging out in the garage, and through much of their new CD, Psychedelic Sunrise, sound like they’re having a Halloween party in there. The New York band sparked a garage rock revival with their full length debut over two decades ago. Founding members vocalist Greg Prevost and bassist Andy Babiuk ensure the Kings continue to mix the 1960s with a dash of punk hostility.

The Rolling Stones remain an obvious influence, especially on the rollicking “Stayed Too Long” and the spooky “Spanish Sun,” which evokes “Paint It Black” with an exotic, sitar-driven arrangement. “Elevator Ride” and “Rise and Fall” serve up nightmarish imagery, and Prevost bellows like a heavy metal god on “Dawn.” The energetic “Up And Down” recalls The Ramones, while the fuzzy guitars and irresistible melody of “Outtasite!” celebrate the days of strobe lights and go-go girls.