CD Review: R.E.M. - Live At The Olympia In Dublin 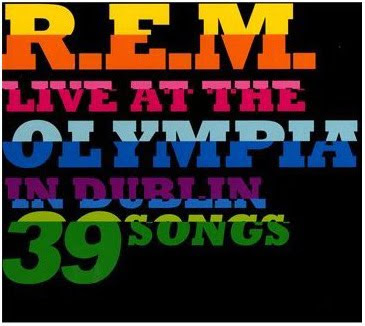 As R.E.M. takes the stage at the beginning of Live At The Olympia In Dublin, there’s a funny sounding announcement that declares, “This is not a show!” Technically, the statement is true since this new double CD is taken from a series of rehearsal sessions the band held in Ireland back in 2007 in preparation for its upcoming CD, Accelerate. The rehearsals were open to the public, and judging from these two discs, those audiences who packed the house on all five nights got their money’s worth.

Frontman Michael Stipe jokingly describes Live At The Olympia In Dublin as both a “grand experiment” and “an experiment in terror” and displays a self-effacing sense of humor throughout the proceedings. In addition to new material like, “Living Well Is The Best Revenge,” “Houston,” “I’m Gonna DJ,” and “Man-Sized Wreath” that would inspire talk of R.E.M.’s big comeback once Accelerate dropped, the band offered a retrospective that stretched back to its Chronic Town debut EP. The 39-song set list is rock solid despite leaving out favorites like “Radio Free Europe,” “Orange Crush,” “Stand,” and “Losing My Religion.”

The songs sound pretty much the same as they did on R.E.M.’s albums, with a minimum of jamming. Stipe takes good-natured pot shots as his early songwriting skills, introducing “1,000,000” with the quip, “lot of depth on this one,” and noting before “Kohoutek” that, “I did figure out in the late 1980s that narrative was not a terrible thing.” Still, the band’s earliest songs, such as “Wolves, Lower” and “Gardening At Night” stand the test of time. Ditto for “So. Central Rain,” “Disturbance At The Heron House,” and “Driver 8.” The stark and slow-moving “Drive,” the angular “Feeling Gravity’s Pull,” and the more ornate “Electrolite” are also impressive.

Live At The Olympia In Dublin covers a span of over two decades, but it’s more fun that the material isn’t presented in chronological order. It’s not every band that can reel off 39 of its own compositions and not have a single dud among them. As Stipe says at one point, “We’re R.E.M. and this is what we do.”