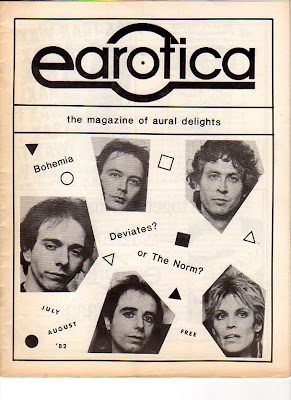 Long before thousands of aspiring writers around the globe took to the Internet to create blogs about everything from Britney Spears to politicians, many hardworking types expressed their creativity in magazines and newspapers. As dire predictions about the demise of the publishing industry in general continue to circulate, I’d like to honor some of the lesser-known periodicals that have fallen by the wayside. So today, I’m kicking off a new, semi-regular feature here at Broken Hearted Toy.

I’ve had this issue of the punk rock ‘zine earotica in my collection for several years, but I have no idea about its history. Published in the summer of 1982, this might have been the first edition, judging from an introduction by editor Ed Weaver, and a column by his co-editor, G. S. Johnson.

The bulk of the magazine is devoted to a piece by Johnson (with photos by Sherry Scalise) about one of Chicago’s best punk bands, Bohemia. After a few paragraphs about the group’s records and live performances, Johnson settles in for a Q&A with lead vocalist Carla Evonne, bassist Zirbel, saxophone player/guitarist Fast Frank, guitarist/vocalist Lee D’Buddah, and drummer Mark Wallner. They praise a new generation of Chicago acts like The Effigies, Strike Under, and Naked Raygun, but lament the city’s overly sedate club scene, the lack of support from radio stations, and the need for a local music publication that could wield international influence ala the Village Voice or L.A. Free Press.

The 20-page earotica has a bare-bones, black and white layout, with a handful of ads on the inside of the front and back covers. Its presentation may not be awe-inspiring, but it evokes an exciting period in Chicago’s history when cutting-edge bands were emerging and low-budget, hip publications were springing up to cover them.