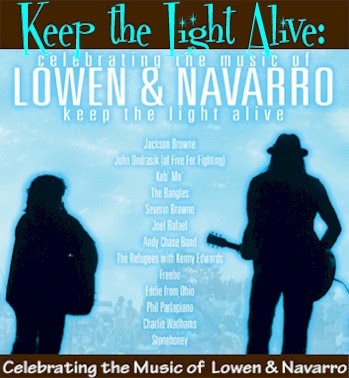 The Bangles have recorded the Lowen & Navarro song, “We Belong” for a new album of various artists honoring the duo for its impressive career as songwriters and performers. Keep The Light Alive - Celebrating The Music Of Lowen And Navarro draws musicians like The Bangles, Jackson Browne, and Keb Mo’ together in support of Eric Lowen, who was diagnosed with ALS five years ago. The CD is currently available from AIX Records, and will be available on iTunes as of December 10th. Proceeds will benefit The Eric Lowen Trust, ALS Association (Greater Los Angeles Chapter), and Augie’s Quest.

In other Bangles news, the band’s “Walk Like An Egyptian” will be “added next week to the Rock Band Music Store of downloadable content for the Xbox 360 video game and entertainment system from Microsoft, PlayStation 3 computer entertainment system and Wii.” I’m quoting directly from The Bangles website because I have no idea what any of that means. I still have 45 records of The Bangles.

Still no word about the new CD The Bangles reportedly starting recording a few months back. Hopefully, the coming year will bring more info.