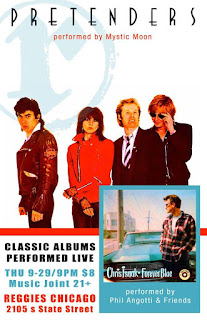 Thursday, September 29 is going to be a night of tribute shows around the Chicago area.

The Arcada in St. Charles will be presenting Space Oddity - David Brighton’s Tribute To David Bowie. Brighton has played the Whiskey A Go Go in Hollywood, CA, and has been featured on AXS-TV’s World’s Greatest Tribute Band series. Tickets start at $29; the concert begins at 7:30 p.m.

The Classic Albums Performed Live series continues at Reggie’s Rock Club on State Street in Chicago with a double bill of Pretenders and Chris Isaak covers. The evening kicks off at 8:00 p.m. with Mystic Moon performing the 1980 self-titled debut by The Pretenders. I wasn’t able to find out anything about this band, other than its choice of cover material shows excellent taste in music. The Pretenders conquered the world with their first effort, fueled by powerful tracks like “Precious,” “Tattooed Love Boys,” “Kid,” and the hit single “Brass In Pocket.” If Mystic Moon has the chops, this will be an exciting gig.

Phil Angotti, a musician who has been performing authentic tributes to The Beatles, Squeeze, The Monkees, The Bee Gees (early Bee Gees, that is) and numerous other acts, follows with a set honoring Chris Isaac’s 1995 Forever Blue album. Featuring the songs “Baby Did A Bad Bad Thing,” “Go Walking Down There,” and “Somebody’s Crying,” Forever Blue is regarded as one of Isaak’s best efforts. Dan Ingenthron and Chris Anderson will be joining Angotti. Admission for tomorrow night’s Classic Albums Performed Live is $8.

Liverpool Acoustic will be performing Beatles songs at Mac’s On Slade in Palatine at 8:00 p.m. The Chicago-based trio comprises Rob Lane on vocals and rhythm guitar; Ryan Lane on vocals, lead guitar, and keyboards; and Matt Bednar on vocals and bass.
Posted by Terry Flamm at 9:57 PM