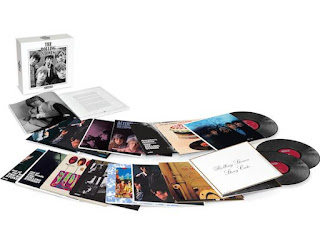 The Second Disc website, a fantastic news source for upcoming CD and vinyl releases, reports that a massive box set from The Rolling Stones is on the way. Simply titled Mono, the 15-CD (or 16-LP depending on your choice) will include mono versions of every album the band released from 1964 to 1969. Illinois Entertainer writer Jeff Elbel gives Mono a rating of 10 out of 10 in the October issue. The box set comes with a bonus disc of rare tracks called Stray Cats.

In a separate post, The Second Disc heralds the arrival of the new Aussie label Playback Records and its first various artists release. I Want, Need, Love You!: Garage Beat Nuggets From The Festival Vaults features songs from 1960s down under acts The 5, The Black Diamonds, The Pogs, and Toni McCann.

One of the most iconic albums in rock history will get some time in the spotlight tomorrow night as the Brian Wilson Celebrates Pet Sounds 50th Anniversary tour visits The Chicago Theatre. Wilson, the guiding force for Pet Sounds and much of the Beach Boys’ canon, will be joined by band members Al Jardine and Blondie Chapman on gorgeous tunes like “Wouldn’t It Be Nice,” “God Only Knows,” and “Sloop John B.”

The Gene Siskel Film Center’s Second Annual Irish American Movie Hooley, a festival of flicks, kicked off tonight and will run through Sunday.

The third annual Beverly Art Walk takes place on Chicago's south side, from 95th street to 111th Street this weekend. Two hundred artists, including my niece Allison, will be showing their work at the event.

Music Box Theatre on Chicago’s north side continues to offer the new Ron Howard documentary The Beatles: Eight Days A Week–The Touring Years. There are several showings scheduled over the coming this week.

Peter Case, a former member of the highly influential bands The Nerves and The Plimsouls, will be celebrating the 30th Anniversary of his first solo album at FitzGerald's in Berwyn next Wednesday, October 5.

I posted a review this past Monday of The Smithereens' recent concert at City Winery Chicago. In addition to experiencing an evening of classic power pop material like "Blood And Roses" and "House We Used To Live In," I picked up an autographed copy of the two-CD set Esp3cially F0r You. It's a 30th Anniversary celebration of the band's full-length debut that contains live, demo, and acoustic version of all the tracks, plus other rarities. I'm hoping to review it here soon.

Tributosaurus, one of Chicago's best-known tribute acts, will try its hand at Slowhand next Wednesday, October 5, when it becomes Eric Clapton.

Ricky Gervais, in his David Brent character from the original version of The Office TV show, has released an album titled Life On The Road. A full page ad in the October issue of Mojo boasts, "Includes the Brent classics Lady Gypsy, Freelove Freeway, Life On The Road, and Slough." It's available on Amazon.

The current issue of Streetwise is a Fall Festival Guide with listings for several upcoming events in Chicago. Pick up a copy from a vendor in the downtown area or in your neighborhood.

Mike Mills from R.E.M. and Robert McDuffie will perform Concerto for Violin, Rock Band and String Orchestra on November 7 at the Harris Theatre in downtown Chicago.
Posted by Terry Flamm at 10:51 PM