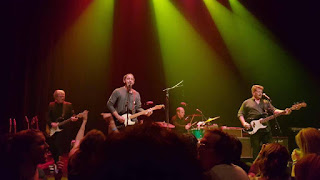 The Matthew Sweet/Material Reissue show at Park West last Friday was more of a double bill than a headliner and opener affair. Material Reissue, a trio comprising original members drummer Mike Zelenko and singer-bassist Ted Ansani, along with singer-guitarist Phil Angotti, have performed occasionally around town since coming together in 2011 to mark the 20th Anniversary of Material Issue’s debut International Pop Overthrow. Matthew Sweet has a loyal following in Chicago, where power pop fans embrace his catchy, guitar-driven songs. It was immediately evident Friday night that the packed house was eagerly anticipating both acts.

Even though Material Issue’s original frontman—the late Jim Ellison—was a singular talent, Zelenko and Ansani’s decision to recruit Angotti in 2011 has never seemed to alienate fans. Like Ellison, Angotti lives and breathes 1960s-style pop arrangements, and the two were good friends. With the further addition of guitarist Jay O'Rourke, Material Reissue has been able to perform Ellison’s work faithfully and honor his legacy.

Material Reissue’s Friday night show offered the MTV-fueled hits “Valerie Loves Me,” “Diane,” and “What Girls Want,” as well as some more obscure titles. The band gave a shoutout to WXRT’s Richard Milne before performing “Renee Remains The Same,” noting the air personality helped break them in Chicago by playing that song on his Local Anesthetic show back in the early 1990s. The quartet performed in synch throughout the shows and finished with “Kim The Waitress,” a creepy and magnificent song by The Green Pajamas that Material Issue covered on its Freak City Soundtrack album.

The crowd that had packed the area in front of the stage for Material Reissue was just as wild about Sweet’s performance. Backed by Velvet Crush members drummer Ric Menck and bassist-vocalist Paul Chastain, along with guitarist John Moremen from The Orange Peels and Half Japanese, Sweet opened with “Time Capsule” and powered through catchy songs dating back to 1991. He also provided a preview of his upcoming release Tomorrow Forever.

Moremen and Chastain provided backup vocals, with Chastain often combining with Sweet for fabulous harmonies. Moremen frequently broke loose with impressive guitar firepower. The numerous highlights included “Byrdgirl,” “The Ugly Truth,” and “I’ve Been Waiting.” “Girlfriend,” saved for the encore, found Sweet and his band extending the power pop classic with some impressive jamming.
Posted by Terry Flamm at 11:07 PM