The Smithereens At City Winery Chicago 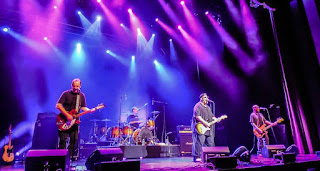 There was something different about last night’s Smithereens concert at City Winery Chicago, but it took a few songs before I realized Pat DiNizio wasn’t playing guitar. He’s still recovering from surgery on his arm due to a nasty fall he took in 2015. DiNizio obviously knows guitarist Jam Babjak, drummer Dennis Diken, and bassist Severo “The Thrilla” Jornacion can unleash waves of instrumental firepower while he’s belting out The Smithereens’ power pop classics. He also reflected on the New Jersey band’s 36-year history, via funny and informative anecdotes between songs.

Opening with “Behind The Wall Of Sleep” from their 1986 debut album Especially For You, The Smithereens powered their way through “Top Of The Pops,” “Miles From Nowhere,” “The Blues Before And After,” and “Now And Then,” with Babjak, Diken, and Jornacion jamming extensively on each of them. The band spotlighted its 1988 album Green Thoughts by performing the title track, along with “Only A Memory,” and once again combined “House We Used To Live In” with the instrumental “Sparks” from The Who’s rock opera Tommy. It would have been nice to hear more from the 2011 album, but aside from a spirited take on “Sorry,” The Smithereens continue to neglect this impressive comeback effort.

Throughout the concert, DiNizio conducted a guided and irreverent tour through Smithereens lore: The hard feelings between the band and its original label Capitol; a visit from actor Kevin Costner, who wanted to “Only A Memory” for his Bull Durham flick; and being introduced by Tony Orlando on a Jerry Lewis MDA Labor Day Telethon. That last bit somehow morphed into DiNizio leading the audience in a sing-along of “Knock Three Times” and “Tie A Yellow Ribbon ‘Round The Ol’ Oak Tree.”

“We’re not just a rock band, we’re entertainment,” DiNizio joked at one point.

There was a much more fervent sing-along at the end of the evening, as The Smithereens led the crowd through “Behind Blue Eyes.” That cover of The Who classic, along with a version of Free’s “All Right Now,” came in the midst of “A Girl Like You.” The high-energy finale also featured The Smithereens blistering their way through an extended “Blood And Roses,” which was the song that started this band’s amazing journey over three decades ago.
Posted by Terry Flamm at 10:30 PM