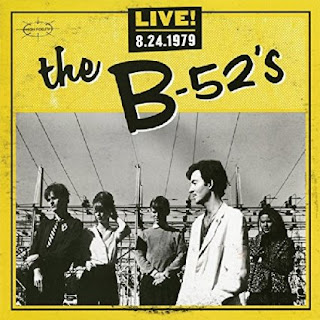 The B-52’s have just released 8-24-1979, a live recording of a concert they performed over 35 years ago at Berklee College in Boston. In reviewing the album for this month’s Illinois Entertainer, critic David C. Eldridge notes, “the band just nails it onstage proving the infectiously quirky call-response, surf rock guitar-licked sci-fi gender-bending keys, and frug-grooved beat that was captured on its first album was no fluke.”

Guided By Voices will be at Metro tomorrow (Saturday) night, along with Broncho and Split Single.

The Nicholas Tremulis Orchestra and Jay O’Rourke will be performing tomorrow night at FitzGerald’s in Berwyn.


The Zombies will be performing at The Golden Nugget Hotel and Casino in Las Vegas on September 9.

The Cottage Pub in Crystal Lake is celebrating its 7th Annual Beatles Blast this weekend with a batch of British Invasion tribute acts. On Saturday, Badge will perform as Cream; Who’s Who will be The Who; and American English will cover The Beatles. On Sunday, there will be a TBD act covering The Rolling Stones, Kashmir covering Led Zeppelin, and Beatlerama covering The Beatles. The event also promises a re-creation of the famed Mathew Street in Liverpool. Tickets are $10 per day or $15 for a two-day pass.

Matthew Sweet will be in town next Friday, September 9 at Park West. Material ReIssue, which includes bassist Ted Ansani and drummer Mike Zelenko from the original Material Issue, with Phil Angotti replacing the late Jim Ellison on lead vocals, will be the opening act.

Chicago Innerview, a rock publication that always seems to magically appear every time a major festival is happening, has just put out a Riot Fest issue with 30 pages of band profiles. Even if you don’t plan on going to Riot Fest, this is a very useful guide for discovering new music. Pick up a copy at the Reckless Records location on Madison downtown.

Riot Fest, which some indie rock fans swear is the best rock festival of the Chicago summer season, takes place September 16–18 in Douglas Park. This year’s lineup carries on a tradition of offering big stars from a variety of genres, such as Sleater-Kinney, Smoking Popes, Fitz And The Tantrums, Bob Mould, The Specials, Death Cab For Cutie, The Flaming Lips, Method Man and Redman, Morrissey, NAS, Juliette Lewis And The Licks, Jake Bugg,The Toasters, Ween, and Julian Marley.

Chicago free paper Redeye recently reported that actress Karen Gillan has been added to the cast of Jumanji, a sort of sequel to the 1995 flick starring Robin Williams. As Amy Pond on Doctor Who, Gillan created a memorable character that grew from a wide-eyed innocent to a battle-tested heroine that kept her sense of humor, as well as a deep love for her husband Rory. The new Jumanji will also feature Dwayne Johnson, Jack Black, and Kevin Hart.

Minstrel Palooza is back for its second year. This time, the celebration of the Minstrels music store in Niles, takes place at the Home House Of Music And Entertainment on Rand Road in Arlington Heights. Van Go, Cliff Johnson and The Raine, and Cracked Actor are among the acts that will be performing.
Posted by Terry Flamm at 11:18 PM