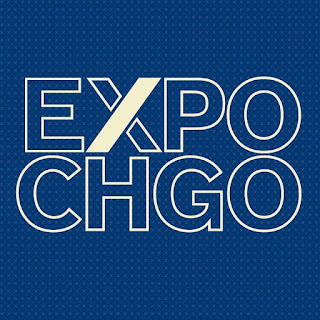 EXPO CHGO, The Fifth International Exposition Of Contemporary Art opened at Navy Pier yesterday, and will run through this Sunday. Over 140 galleries from around the world will be presenting their work at EXPO CHGO, which has become one of the city’s most popular and sophisticated art events.

Sound (of) The Alarm. Mike Peters, lead vocalist for The Alarm, has a solo gig tonight at the Old Town School Of Folk Music. The North Wales band started in the late 1980s with Clash-inspired fare like “Where Were You Hiding When The Storm Broke?” and “The Stand,” and later had hits with “Rain In The Summertime” and “Sold Me Down The River.” Peters will join The Alarm for a U.K. tour starting in November.

Depending on what time you see this post, you might still be able to catch part of the five-act Smorgasbord Of Rock event at the Live Wire lounge on Milwaukee Avenue. Curated by singer-guitarist Michael Mazza from The Collectors, the lineup features an acoustic set by Brian McDowell at 8:00, followed by performances from The Statutes Of Liberty at 8:45, The Cells at 10:45, and Black Cat Heart Attack at 11:50. The Collectors, who’ve played many International Pop Overthrow Chicago gigs, go on at 9:40.

The Dandy Warhols will be feeling bohemian like you when they perform tomorrow night at Park West. Savoy Hotel is the opening act.

Sometimes when people ask me for a definition of power pop, I’m tempted to give a two-word answer: The Smithereens. The New Jersey band, fronted by singer-guitarist Pat DiNizio, will be opening their treasure chest of gems like “Behind The Wall Of Sleep,” “Blood And Roses,” and “House We Used To Live In” at City Winery - Chicago this Sunday night.

Eric Burdon and The Animals will be at that same venue on Monday and Wednesday next week.

I had a chance to catch the tail end of the second annual Minstrel Palooza, last Sunday at the Home House Of Music And Entertainment in Arlington Heights. Van Go did a high energy set, and it was great to hear my favorite song by them “Three Minutes Are Up.” Cliff Johnson and The Raine closed out the day-long event with a short but classic selection of Off Broadway material.

The Brian Wilson Celebrates Pet Sounds 50th Anniversary tour wraps up next Saturday, October 1 at The Chicago Theatre. Al Jardine and Blondie Chapman will join Wilson for the performance.

Today is the official release date for the reissued Evolution and Butterfly albums by The Hollies on 180g vinyl, with mono and stereo versions of every track. Each two-record set comes with a free download of the songs. Evolution and Butterfly originally came out at the height of the first psychedelic era, and showcased Graham Nash, Allan Clarke, Tony Hicks, Bobby Elliott, and Bernie Calvert at the height of their creative powers. Check out Amazon for more info.

Chicago power pop band Thrift Store Halo will be heading back to Balleydoyle Irish Pub and restaurant in Downers Grove on November 10.

There will be a five-act showcase next Friday night, September 30 at Martyrs’ on Lincoln Avenue. Slim Gypsy Baggage, Waiting For Henry, Brad Peterson, The Polkaholics, and Broken Hearted Toy favorites The Handcuffs will be performing.

Also, in an Irish vein, the Durty Nellie’s restaurant in Palatine will be throwing a Halfway To St. Paddy’s Day bash next Friday, September 30. The entertainment kicks off with the Trinity Irish Dancers at 7:00 p.m., followed by performances from Bagpipers, Logical Fleadh, and The Ploughboys.

The Metropolis Performing Arts Center in Arlington Heights has announced its 2016/2017 season, with its current production of the Mel Brooks musical Young Frankenstein being the last offering for this year. 2017 will see Rosencrantz And Guildenstarn Are Dead, Hair, and Peter And The Star Catcher coming to The Metropolis.
Posted by Terry Flamm at 10:50 PM