Revolver Revisited And Other Fest For Beatles Fans - Chicago Musings 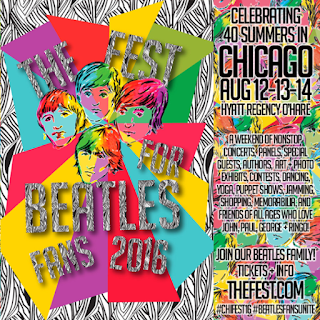 Traditionally, I title my review of Fest For Beatles Fans - Chicago I’ve Just Seen A Fest, but due to the long delay in getting this post completed, the title had to change. Although it might seem odd to do a review this late in the game, there were a number of things about this year’s Fest worth mentioning.

You could call The Fest For Beatles Fans - Chicago a celebration with kaleidoscope eyes. The Chicago version, which was once again held at the Hyatt Regency O’Hare in Rosemont, features musicians; authors; artists; and photographers who have all drawn inspiration from The Beatles. A screening room shows Beatles-related films, fans show up in a wide range of Beatles t-shirts, and the huge marketplace is filled with vendors offering every imaginable kind of Beatles swag.

It was nice to see WXRT air personality Terri Hemmert had recovered enough from her recent back surgery to carry out her duties as MC—a role she’s performed every year since the second Fest For Beatles Fans - Chicago back in the late 1970s. Hemmert was at the top of her game as she interviewed George Harrison’s sister Louise (accompanied by Marty Scott from the tribute band Liverpool Legends) and introduced various guest and events.

Artist and musician Klaus Voormann, the early and influential friend of The Beatles who created the iconic cover art for their Revolver album, returned to The Fest this year to promote his new graphic novel/hardcover book Birth Of An Icon. He approached the room where he would be signing copies as if it were a pub, and the people waiting in line were his mates. Buying the book—which provides insightful commentary on how he came up with the Revolver concept, as well as several pages of fantastic illustrations—was my main goal for this year’s Fest, and it was a kick to meet Voormann.

The Apple Jam Stage, which was added last year, continued to yield fruit this time around. The only problem was that it was moved from its 2015 second floor perch to the main lobby, where some people (probably not Fest-goers) apparently thought it was the talk loud and be obnoxious area. The noise level was a challenge for Phil Angotti as he began an acoustic set of Paul McCartney tunes. He was able to win over the crowd, especially when his pal and fellow Beatle Brothers band mate Jay Goeppner joined him for some terrific harmonies.

Scott Erickson’s Apple Jam set later on Saturday was a triumph on three levels. First, he had the difficult task of replacing vocalist-guitarist Pat DiNizio of The Smithereens, who had to cancel due to a family emergency. Second, the unruly crowd included drunks by that point, and third, Erickson was performing the entire Abbey Road album on acoustic guitar for the first time in front of a live audience. And he pulled it off masterfully.

The Weeklings were back for their second year and performed a spirited concert on Saturday afternoon. The concept behind this group, which features guitarist-vocalist John Merjave and bassist-vocalist Glen Burtnik from the Beatles tribute band Liverpool, along with guitarist-vocalist Bob Burger and drummer-vocalist Dave Anthony, is to create a cohesive mix of rare Beatles compositions and original tunes that sound like they could have been done by The Beatles. The Weeklings will soon release a follow-up to their highly enjoyable debut Monophonic.

Liverpool is a must-see at each year’s Fest For Beatles Fans - Chicago because it does such an incredible job of recreating the classic sound of The Beatles. Guitarist John Merjave, bassist Glen Burtnik, rhythm guitarist Drew Hill, and drummer Chris Camilleri can all sing lead, and they join together for impressive harmonies. With Marc Rubinstein's Pig Light Show providing a suitably psychedelic ambience, Liverpool performed the fist half of Revolver in the Grand Ballroom on Saturday night, with the second half coming on Sunday.

Liverpool’s Saturday night show also included other songs The Beatles recorded over the years. After a short break, the band was joined by guest musicians Joey Molland from Badfinger; musician/producer Mark Hudson; and singer Billy J. Kramer for a set of British Invasion hits and rock standards that served as high-powered, jam-filled finale for Fest For Beatles Fans - Chicago.
Posted by Terry Flamm at 9:57 PM