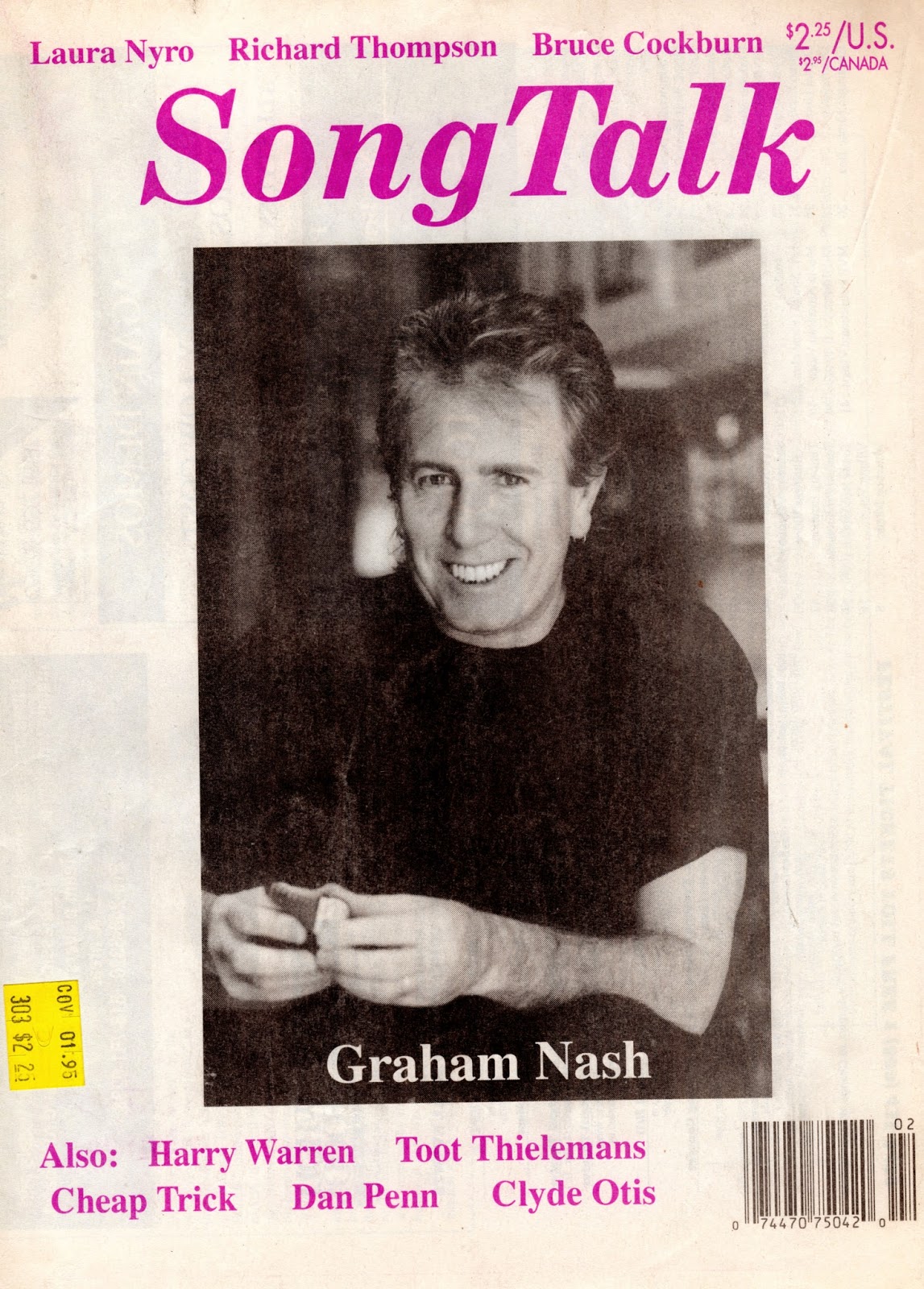 There was a recent post on the Graham Nash Facebook page announcing a show called Songs And Conversation that he and his daughter Nile will be doing at the BB’s Jazz, Blues and Soups venue in St. Louis on October 26th. In addition to giving me hope that Nash might be getting closer to making a Chicago area appearance, this news reminded me of a publication I purchased in 1994. Song Talk was based in Hollywood, California and was put out by the National Academy of Songwriters on a quarterly basis.

At the time of this issue (Volume 4, Issue 2), Dan Kirkpatrick was the Publisher; Paul Zollo was the Editor, Brett Perkins was the Managing Editor, and the remarkable Henry Diltz was the Chief Photographer. As a professional proofreader myself, I’m happy to see that Song Talk also listed its proofreader Abigail Bram on the masthead. Diltz took the front cover shot of Nash, and the variety of shots used throughout Zollo’s six-page article/interview reflects the long-term professional relationship Diltz had with Nash dating back to the singer-songwiter’s days with The Hollies. The feature would be continued in the next issue of Song Talk.

Among several other topics, Zollo spoke with Nash about writing “King Midas In Reverse” and his eventual fallout with The Hollies; how Cass Elliott introduced him to David Crosby without mentioning who Nash was; and how his anger about social injustice sparked the inspiration for “Chicago.” I’m not sure about Song Talk in general, but Zollo was a busy guy in this issue; penning articles on Art Garfunkel, Richard Thompson, Laura Nyro, and Bruce Cockburn. Kevin McCarley conducted interviews with Rick Nielsen and Tom Petersson of Cheap Trick about songwriting and the band’s latest album Woke Up With A Monster.

Most of the ads in this issue of Song Talk were related to the art and technology of songwriting, along with some for local clubs and the sorely missed Tower Records. A two-page spread titled Acoustic Underground showcased the Songwriters In The Round series at the Troubadour club in West Hollywood. Among the artists pictured were Wendy Waldman, The Nields, and Dar Williams. Another feature, called New Faces, profiled up-and-coming singer-songwriters, including Lisa Loeb.
Posted by Terry Flamm at 10:27 PM