Bowie Bash And Other News 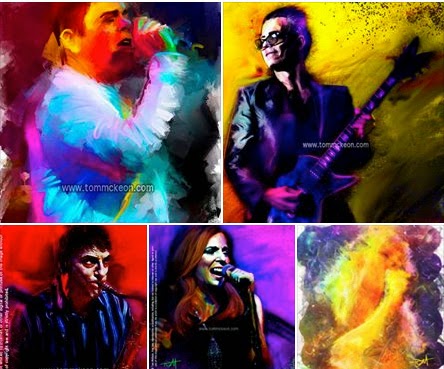 Portraits of Sons Of The Silent Age band members by artist Tom McKeon.

A few other points of interest before moving on David Bowie Day.

Mike Thomas, a well-known reporter for the Chicago Sun-Times, will be signing copies of his new biography You Might Remember Me: The Life And Times Of Phil Hartman at the Barnes And Noble/DePaul University Bookstore at 1 East Jackson tomorrow night at 6:00 PM. Thomas will also be at Anderson’s Bookshop in Downers Grove on Wednesday; The Book Cellar on Lincoln Avenue next Tuesday, September 30th, and next Thursday, October 2nd, at The Book Stall in Winnetka.

Whitewolfsonicprincess, Carla Hayden and James Moeller’s cutting-edge rock offshoot of their avant garde theater company Black Forest, has an 8:00 PM gig this Wednesday night at the Underground  Wonder Bar. Songs from 10 + 1, the second CD from Whitewolfsonicprincess are now available on iTunes. In my review of 10 + 1, I noted its mystical theme, particularly on “Sad-Eyed Prophet” and “Inner Light,” and praised Hayden’s sultry, almost spoken word delivery. Underground Wonder Bar is located just north of downtown, at 710 N. Clark Street. Admission is $5.00.

Welcome to all those who have come to Chicago for the David Bowie Is exhibition that opens tomorrow at the Museum Of Contemporary Art. In case you didn’t know, there’s an MCA and WXRT sponsored David Bowie Day celebration taking place tomorrow at the Daley Center. Sons Of The Silent Age, a very accomplished Bowie tribute band, will be performing. For tourists and Chicagoans alike, here’s a brief rundown about tomorrow’s festivities from the group’s Facebook page:

“Sons of the Silent Age [will] play one song at Noon tomorrow at Daley Plaza, then there will be 3 short (?) speeches (including Da Mare), after which we play until we’re stopped, a little after 1pm. Have a freaky day.”

Here’s a bit of my review of a Sons Of Silent Age show at Durty Nellie’s in Palatine a while back:

Chris Connelly consistently nailed Bowie’s distinctive delivery, from the soulful crooning of “Stay” to the down and dirty “Diamond Dogs.” Saxophone player-vocalist Rich Parenti and vocalist Claire Massey (formerly with The Tami Show) provided expertly timed backup vocals. Connelly doesn’t go in for a lot of makeup or elaborate costumes, but projects the aura of a classy, yet cutting-edge rock star.