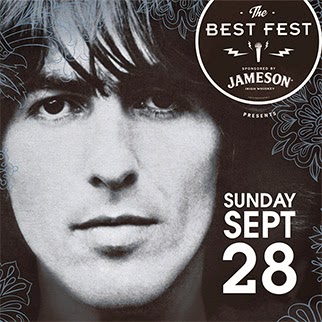 Before moving on to George Fest, just a quick note that Chicago-based filmmakers Scott Drucker and Yu Gu are seeking Kickstarter funding for their film Who Is Arthur Chu?  It’s a documentary about the charismatic Jeopardy champion and they have only until 9:27 AM tomorrow to meet their $50,000 goal. It doesn’t seem likely at this point, but maybe a flurry of supporters will come in at the last minute and save the day. Best of luck to Scott and Yu.

At the beginning of yesterday’s post about the upcoming The Art Of McCartney tribute CD, I noted that we’ll always find new ways to celebrate The Beatles. It’s also true that one sure way to inspire people to support a worthwhile cause is to stage a Beatles-related event. Both observations hold true in regard to George Fest, which takes place on September 28th at the Fonda Theatre in Los Angeles.

All proceeds from this multiple-performer concert will go to The Jameson Neighborhood Fund To Benefit Sweet Relief, an organization created to help musicians cope with the costs associated with medical care. Its supporters include several of today’s most popular acts. George Fest is being co-presented by Goldenvoice and The Best Fest.

Among the acts playing their favorite Harrison songs will be George’s son Dhani, who has embarked on a successful career with his own band thenewno2. Brian Wilson from The Beach Boys and Ann Wilson from Heart, two artists who contributed to The Art Of McCartney CD, are involved with this project as well. Other notables in the impressive lineup include Nora Jones, “Weird Al” Yankovic, Cold War Kids, Black Rebel Motorcycle Club, and members of Guster, Spoon, The Killers, Flaming Lips, and Weezer. Tickets for George Fest are now for sale at a reasonable price of $35.00.
Posted by Terry Flamm at 11:06 PM